(SANTA FE, N.M.) - Buoyed by a pair of 1-under-par 73 performances from Marianna Monaco and Ina Kim, New York finished Round 1 of the 12th USGA Women’s State Team Championship, which is being contested at The Club at Las Campanas in Santa Fe, N.M., with a three-stroke lead over Arizona. A par-72 Jack Nicklaus layout, the Sunrise Course at Las Campanas played at 6,233 yards on Tuesday. 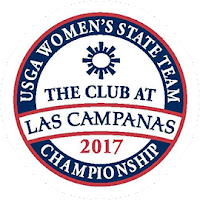 Kim, 34, of New York, set a blistering pace early, birdieing the first three holes and five of the first six before giving three strokes back with a bogey on 8 and a double bogey on 9. After another double bogey on 11 dropped her to even par, she played 1 under over the final eight holes, including a birdie on No. 13.

“I was en fuego early. It was like an out-of-body experience. I couldn't not hit it close to the hole,” said Kim, the runner-up in the 2000 U.S. Girls’ Junior Championship. “And then there were some hiccups around the turn. Once the wind picked up, it turned into a little bit of a disaster for a bit. But I tried to get over it and move on. I talked about that this morning with [teammate LeeAnn Lewis]: If you get knocked out, get back up again.”

Monaco, 22, of Yonkers, played consistent, clean golf, posting three birdies on the outward nine and coming in 2 over. A long hitter, Monaco used a 4- or 5-iron on most tee shots on the par 4s.

“I hit it long, but I don't always hit it straight,” said Monaco, the 2017 New York State Women’s Amateur champion. “And on this course, you can't be wide off the tee. My round was more fairway, green, then two-putt. Other than two bogeys on the back nine, I can't really complain about anything. It was kind of boring golf today, honestly.”

The Women's State Team consists of three-player teams, with all 50 states plus the District of Columbia and Puerto Rico eligible to field teams. This year, 47 states and the District of Columbia fielded teams, with North Dakota, Puerto Rico, South Dakota and Wyoming opting not to compete. The championship consists of 18 holes of stroke play on Tuesday, Wednesday and Thursday. The best two scores for the team count toward the team score, with the third score acting as a tiebreaker. After 36 holes, the field will be cut to the low 21 teams and ties, plus any individual whose team missed the cut but is within five strokes of the individual lead. The low individual after 54 holes receives a gold medal.

The USGA's State Team championships began in 1995 as part of the Association's Centennial Celebration. They were conducted on a biennial basis until 2010, when the men and women began alternating years. After a two-year review process with state and regional golf associations, it was announced in March that the USGA would retire its State Team championships at the end of the 2017 season. The USGA annually conducts 13 national championships, 10 of which are strictly for amateurs.

After Arizona on the leader board, three teams finished the day tied for third, four strokes back at 2-over 146: Florida, North Carolina and Tennessee. Tennessee, one of three teams in the field comprised solely of teenagers, was led by Riley Rennell, 19, of Columbia. Rennell posted the low individual score of the day at 4-under 68, posting seven birdies.

“I played really well. I was having trouble with my irons, but I had a lot of wedges into the green,” said Rennell. “I made a lot of birdies when I had a wedge in my hand. I was able to hit it pretty close and my putting was really on.”

New York, Arizona and Tennessee all played in the afternoon wave, while Florida and North Carolina received all-around team efforts to put themselves in early contention. All three members of the Florida team – Alexa Pano, Tara-Joy Connelly and four-time U.S. Women’s Mid-Amateur champion Meghan Stasi – shot 1-over 73. North Carolina was led by Sarah Bae, 23, of Pinehurst, who shot even par.

“The course was great. The weather conditions were awesome because we got lucky with the draw,” said Bae. “I'm proud of my team.”

“I feel pretty good, especially with how windy it was this afternoon,” said Potter, 29, of Franklin. “I just tried to stay in my lane, go for the holes where I thought I could make birdie, then try to make pars on the others. I struggled a little on my final nine, because that wind got really intense, but I was glad to finish birdie-par.”

New Mexico, which has finished in the top 10 of the last two Women’s State Team Championships, struggled out of the gate. Jacquelyn Galloway, 17, of Rio Rancho, posted the team’s best score at 5 over. Chanet Fiorina-Trujillo, 25, of Santa Fe, shot 14 over; and Samantha Surette, 45, of Albuquerque, shot 18 over.

Galloway admitted to being nervous prior to teeing off in front of a large crowd. She recorded a double bogey on her first hole, No. 10, then played a solid 3 over the rest of the way, birdieing Nos. 17 and 6.

“I love USGA championships always, so to play in one in my home state is great,” she said. “I was getting a little anxious before I teed off because I was playing sick, too. But it was still a great experience.”

Defending champion and four-time winner Georgia finished the day in a tie for 22nd place, led by Ivy Shepherd’s 3-over 75.

This is the second USGA championship in New Mexico, joining the 1999 U.S. Women’s Amateur Public Links at Santa Ana Golf Course in Santa Ana Pueblo. Only two competitors in this week’s field competed in the 1999 WAPL: Sue Billek Nyhus, of Utah, and Leslie Folsom, of Washington.
Posted by Blogger at 11:26 AM