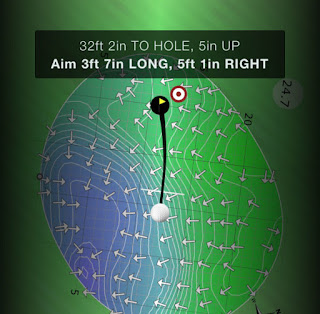 The app was created for the Insperity Invitational, a Champions Tour event held at The Woodlands in Houston last weekend, and featured a putt predictor that utilized StrackaLine’s best-in-the-game greens maps.

Fans were able to download the free app, and set the ball location on the green. Utilizing StrackaLine’s cutting edge technology, the app showed fans how far and on what line each putt needed to travel to go in the hole.

“The Inspertity Interactive Golf App was a great way to enhance the experience of spectators at the tournament and those watching on television,” said Jim Stracka, president of StrackaLine. “We were certainly happy to work with Steve and the Secret Golf team to help build what I think is the game’s premier tournament app.”

StrackaLine dispatched its laser scanner to The Woodlands and scanned the course’s greens, collecting millions of data points on each surface. Utilizing patented technology, StrackaLine then produced topographical greens maps that are accurate down to the millimeter.

The greens maps, which feature easy to read arrows, allowed viewers to see contour and fall lines, in addition to slope percentage, anywhere on the green with the putt predictor.

StrackaLine’s quality and accuracy have led to widespread adoption on the PGA, LPGA, Symetra and Web.com tours, in addition to their use by more than 300 Division I college teams.

StrackaLine scans courses for $1,500 and that includes 100 greens guides for resale. The scanning process takes five hours to complete and is unobtrusive to the golfer experience.

StrackaLine now has 700+ courses scanned, including some of the nation's most prominent layouts. Use of the greens guides at the highest levels of the game surged throughout 2017, and the company now counts nearly every Division I golf program, including last year’s national champions, among its users.

For more information on how to order a greens guide or have a course scanned, go to www.StrackaLine.com.

For more information on how to order smart phone apps or yardage guides, go to http://www.BestApproach.com.
Posted by Blogger at 10:06 AM