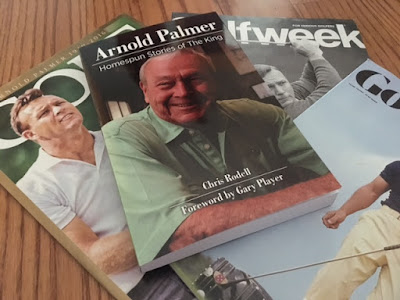 When I was a kid, before I began playing golf, I would sit in my grandfather’s living room and watch whatever tournament was on TV. By this time, Tom Watson, Fuzzy Zoeller and Curtis Strange were the PGA Tour’s established stars and new names like Freddy Couples and Bernhard Langer were making noise. I missed Arnold Palmer’s prime by many years, but felt like I knew as much about him as any other professional golfer because of all the stories my grandfather would share.

Whether the story was about Palmer’s working-class up bringing, his time in the Coast Guard stationed just down the road in Cleveland, or how he took the game from the exclusive country club members and shared it with the rest of the people, Gramps could never get enough of The King.

I was recently introduced to a new book by Chris Rodell, “Arnold Palmer: Homespun Stories of The King,” which brought back a lot of fond memories of my own childhood. Reading antidotes from people ranging from his neighbors in Latrobe, Pennsylvania, to broadcaster Jim Nantz and former Keystone State governor Tom Ridge, was like a Sunday afternoon back home.

While I enjoyed the forward by Gary Player and thoughts from other professionals or celebrities, it was the stories from common, everyday people that really struck me. Arnold Palmer may have been the most approachable superstar ever - from his days dominating the PGA Tour all the way to passing in September 2016. There may never be another man quite like Arnie.

“Arnold Palmer, Homespun Stories of The King” is published by Triumph books and available for only $15 HERE.
Posted by Blogger at 6:45 PM