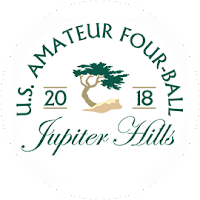 Hammer, 18, of Houston, Texas, and Barber, 18, of Stuart, Fla., overcame the brief deficit in producing their third consecutive lopsided defeat of the championship, defeating former University of North Texas teammates Zack Atkinson, 35, of Colleyville, Texas, and Brad Gibson, 36, of Lewisville, Texas, 3 and 2.

“I think it sparked us,” said Hammer of losing the opening hole. “It woke us up from the early trance that we were in.”

Earlier on Tuesday, the duo dispatched mid-amateurs Tug Maude, of Atlanta, Ga., and John Sawin, of San Francisco, 4 and 3, in the Round of 16.

In three matches this week, Hammer and Barber, Nos. 52 and 57, respectively, in the World Amateur Golf Ranking, have played just 43 holes and are a combined 15 under par (with the usual match-play concessions). During stroke play, Barber, who is headed to Louisiana State University this fall, and Hammer, a 2018 University of Texas signee, posted 9-under 131, including a championship-record 7-under 28 on the first nine of the longer Hills Course. The shorter Village Course served as the stroke-play co-host.

After receiving 7-plus inches of rain since last Wednesday, only a few raindrops fell on the property on Tuesday, most before the Round of 16 commenced at 7 a.m. EDT. The competitors did, however, deal with occasional gusts of wind and challenging hole locations.

It didn’t seem to bother Hammer and Barber as the tandem broke open a tight match by winning four holes in a six-hole stretch from No. 7.

On No. 7, Hammer and Atkinson, who helped Texas win the 2014 USGA Men’s State Team Championship, both stuffed their approach shots within 10 feet. Atkinson pushed his downhill putt, while Hammer converted from 5 feet to put the side 1 up. Hammer called it the turning point in the match.

The teens took the eighth with a par, then won Nos. 11 and 12 for a 4-up lead. Atkinson and Gibson got one back with a par on the 14th hole, but even a 35-foot birdie by Atkinson at the 15th hole wasn’t enough to win the hole. Hammer matched his birdie with a 12-footer and with Barber in tight on the par-4 16th hole, the Texans conceded the birdie and the match.

“They’re very good,” said Atkinson as he walked into the clubhouse. “You can’t make any mistakes against them.”

All three of the other quarterfinal matches went the distance, and then some. Twice Floridians Marc Dull, 32, of Winter Park, and Chip Brooke, 42, of Altamonte Springs, thought they were going home in their match against 35-year-old Georgians David Denham, of Athens, and Stuart Moore, of Gainesville. Denham and Moore each missed 12-footers on No. 18 to win the match. Then on the first extra hole, the Georgians missed another 10-footer to advance.

Three holes later, Dull, the 2015 U.S. Mid-Amateur runner-up, ended the second-longest match in championship history by draining an 8-footer for birdie on the par 5 to send the side into the semifinals for a second consecutive year.

Thoroughly exhausted from playing 40 holes on Tuesday – the side won its Round-of-16 match, 1 up, over Steven Groover and M. Tyler McKeever – Brooke had his shoes and socks off by the time the transportation cart returned to the clubhouse.

“That was a long day,” said the former caddie who is now in the lumber business.

Former Seattle University teammates Kyle Cornett, 23, of Seattle, Wash., and Patrick Sato, 23, of Bellevue, Wash., who survived a 7-for-6 playoff on Monday to get one of the final spots in the draw, defeated two-time semifinalists Patrick Christovich, 39, of New Orleans, La., and Garrett Rank, 30, of Canada, 1 up. Christovich had a chance to send the match into extra holes, but his pitch from 30 feet lipped out.

Barry, who has signed with Oregon State, and Tidd, bound for the University of Oklahoma in the fall, now face fellow teens Barber and Hammer in the second of two semifinal matches on Tuesday morning.

Earlier in the day, Barry and Tidd eliminated the defending champions, Frankie Capan, 18, of North Oaks, Minn., and Shuai Ming (Ben) Wong, 18, of Hong Kong China, in 19 holes. Wong made a 25-foot downhill par putt on the 18th hole to keep the match going, but the duo each made double-bogey 6s – Capan’s tee shot went into the water – on the 491-yard, par-4 first hole to see their run end.

NOTEABLE:
- The tee on the par-4 sixth hole was moved up 99 yards from its original posted length of 393 yards to 294 yards. But the flagstick was tucked on the back-left tier, creating a challenging hole location for those who wanted to be aggressive off the tee. Barber eagled the hole with a 40-foot putt in the Round of 16.
- For the third time in four years, the medalists from stroke play failed to advance past the Round of 16. Bobby Bucey, of Concord, Calif., and Brett Viboch, of Moraga, Calif., were eliminated by David Denham and Stuart Moore, 2 and 1. Only once in the championship’s four years has the No. 1 seed advanced to the quarterfinals: Brandon Matthews and Patrick Ross in 2016 at Winged Foot Golf Club.
- Frankie Capan and Shuai Ming (Ben) Wong will be back in the spotlight on June 12 when they take part in the inaugural Celebration of Champions during U.S. Open week at Shinnecock Hills Golf Club. Every 2017 USGA champion was invited to take part in a four-hole alternate-shot exhibition with a dinner to follow inside the clubhouse. Capan said he was looking forward to meeting defending U.S. Open champion Brooks Koepka, and both are excited to see three-time U.S. Open champion Tiger Woods.
Posted by Blogger at 3:17 PM