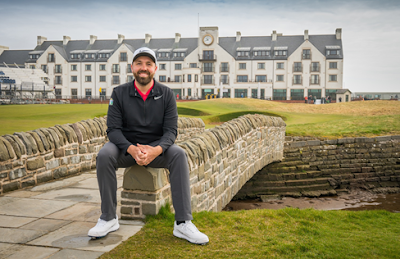 (RELEASE) - Golf’s leading online golf personality and presenter, Rick Shiels, continues to lead the way in golf’s digital broadcast, having recently broken through the 300,000-subscriber mark on his YouTube channel, Rick Shiels Golf. The milestone, which confirms Rick’s position as the world’s largest solo hosted golf channel on YouTube, has been mirrored by a growth in views, with the channel now achieving over 4.25million views per month, as Rick’s informative and entertaining content continues to grip golf enthusiasts around the world.

To celebrate the milestone mark, a new ‘Rick Shiels Golf’ logo was unveiled, as well as the latest video in Rick’s collaborative series with The Open, focussed on this year’s Championship at Carnoustie. As part of the collaboration with The R&A, which sees Rick create exclusive content ahead of this year’s Open Championship to be played at Carnoustie in July, Rick has released a series of videos which see him take on a host of entertaining challenges, shot on-site at the legendary Scottish layout. Produced in collaboration with the global governing body, the series has been hugely successful across the Open’s channels, helping bring the story of golf’s oldest Major to a wider audience than ever before.

Rick’s global audience and influence on both sides of the Atlantic have also seen him recently chosen by the Golf Channel as a judge for the second edition of its Driver vs Driver presented by Wilson television show. Airing this autumn on the highly popular US network, the series follows aspiring golf equipment designers as they compete for the opportunity to have their concept transformed into the next Wilson driver.

On hitting the 300,000-subscriber mark, Rick said: “It means so much to me that the channel has grown to this level. The support I’ve had throughout this journey from my audience has been unbelievable, and I've had some incredible golfing experiences over the past six years which have been a joy to film and share.

“I am excited about the potential for further growth as audience viewing habits continue to shift more towards digital platforms and look forward to the opportunities for creating more unique and entertaining content, with the likes of The R&A and The Golf Channel, in the future.”

Constantly developing his content offering, Rick, who is also an Ambassador for Nike and Lumine Beach & Golf Community, has spent time with the likes of Rory McIlroy, Jason Day, Andrew ‘Beef’ Johnston and Luke Donald over recent months, while continuing to deliver reliable and consumer-friendly product reviews. His commitment to help golfers improve their games has remained firm throughout, with the creation of regular tuition series.

Once you have your video posted on YouTube, it will be time to market it to the masses. If you are curious to know more about real youtube views, check here.