Phillis Meti, Will Hogue Win 'Ak-Chin Smash in the Sun' 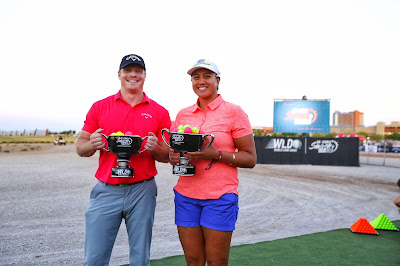 (MARICOPA, Ariz.) – Phillis Meti (Auckland, New Zealand) and Will Hogue (Memphis, Tenn.) claimed the Ak-Chin Smash in the Sun on Tuesday night before a live audience in primetime on Golf Channel. The Maricopa, Arizona desert served as the backdrop for the second televised World Long Drive event of 2018, taking place within the Ak-Chin Indian Community outside of Phoenix.

“It’s been in the works for a long time,” said Meti. “I’ve been working hard to get a number like that, and thankfully today I did.”

On the men’s side, Hogue took advantage of a 421-yard drive on his second ball to win his second title in three weeks, after claiming the Clash in the Canyon last month in Nevada. His opponent in the final – Paul Howell (Wilson, N.C.) – is a familiar foe to Hogue, as the two are good friends and shared a hotel room this week during the course of thecompetition. With the win, Hogue ascends to the No. 3 ranked competitor in the world, after beginning the season as No. 6.

“Paul is obviously one of my best friends in the sport. Obviously we’re sharing a room together [this week], we like each other a little bit. So it’s great to get to hit against him in the finals, it’s a lot of fun.”

The Ak-Chin Smash in the Sun marked the third official event of the 2018 World Long Drive season, as Justin Moose claimed the East Coast Classic in Columbia, South Carolina in March, while Alexis Belton and Hogue won the Clash in the Canyon in Mesquite, Nevada last month. The season continues in three weeks with the Atlantic City Boardwalk Bash, airing live in primetime on Golf Channel, Tuesday, June 5 from Atlantic City, N.J.

Showcasing the truly global nature of World Long Drive, several events will be staged in 2018 through officially sanctioned WLDA international partners, including stops in Germany, Japan, New Zealand and the United Kingdom. Additionally, an all-encompassing international qualifier will be staged (late summer) featuring a minimum of four exemptions into the Open Division of the Volvik World Long Drive Championship in September.
Posted by Blogger at 10:27 AM