(Scottsdale, Ariz.) – Troon, the leader in golf course management, development, and marketing, has named Mike Ryan and Bruce Glasco as co-chief operating officers and executive vice presidents. Both Ryan and Glasco will be charged with directing domestic and international operations for Troon and its 270-plus golf courses worldwide. Current Troon Executive Vice President and Chief Operating Officer, John Easterbrook, has been appointed as the chief membership officer for the PGA of America, a newly created position for the national organization, and will be transitioning from the company over the next few months. 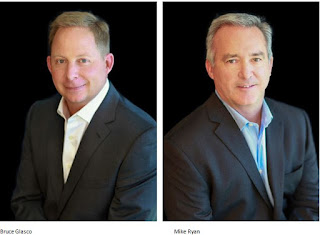 “While we say goodbye to John with mixed emotions, it is a great honor for him and a nod to Troon as an industry leader,” said Dana Garmany, chairman and chief executive officer, Troon. “We thank John for his tireless dedication to Troon over two-plus decades, while congratulating Mike and Bruce on their respective appointments and elevated roles. Our operational leaders will now be strategically positioned in every corner of the world – a move that will help us further elevate and enhance the service levels for our clients, courses and partners.”

Mike Ryan joined Troon in 2001 and served as the company's senior vice president of operations with oversight of clubs, resorts and golf facilities from Florida to Hawaii. In June of 2016, Ryan was promoted to president of the company’s Troon Golf division. In his new co-chief operating officer position, Ryan will continue to oversee operations for Troon Golf while also overseeing the operational direction of the company. Ryan will continue to be based out of Troon's Scottsdale, Ariz. office.

Bruce Glasco joined Troon in 1999 as vice president of operations and was promoted to senior vice president of the company's Australia Pacific Division in 2001. He was appointed senior vice president and managing director of the company's Europe, Middle East and Africa operations in 2006 and in 2012, Glasco was named chief operating officer of Troon International. In 2016, Glasco was promoted to president of Troon International. In his new co-chief operating officer position, Glasco will continue to be based out of Troon's Palm Beach Gardens, Florida office.

For additional news and information, visit www.Troon.com.
Posted by Blogger at 10:08 AM