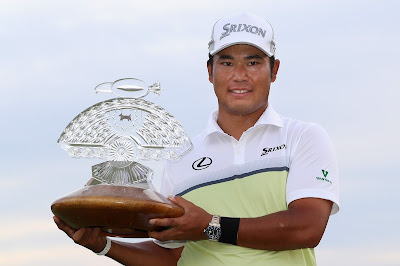 (HUNTINGTON BEACH, CA) – Srixon and Cleveland Golf are proud to congratulate staffer Hideki Matsuyama for his record-breaking playoff victory over the weekend at the PGA TOUR Waste Management Phoenix Open in Arizona. Matsuyama sank a birdie putt on the par-4 17th hole, the fourth extra hole, to clinch a sudden-death win at TPC Scottsdale for the second-consecutive year – this coming after he posted a bogey-free, 5-under-par 66 in the final round to finish regulation at 17-under par. The 24-year-old Matsuyama took the best that the competition, his own nerves, and the largest, loudest crowd on the PGA TOUR could offer him, and he overcame it all to capture his fifth win in his last nine global starts.

“It’s been a good run. I’m going to ride it as long as I can,” said Matsuyama. “The results have been really good these last few months, and hopefully we can just keep it going.”

With this victory, Matsuyama, who stands No. 5 in the Official World Golf Rankings, takes home a $1,206,000 winner’s check and moves back into first place in the PGA TOUR FedEx Cup points standings. Now with four career official TOUR titles (three coming via playoff, a format in which he is undefeated) he holds more all-time wins on the circuit than any other native of Japan and is also the first Japanese player to ever successfully defend a PGA TOUR championship.