(Orlando, Fla.) – Andy Pope, out of Glen Ellyn Ill., saw an opportunity this week at the $40,000 guaranteed purse SwingThought.com Tour event at Shingle Creek Golf Club and seized it by cruising to a four stroke victory over his next nearest competitor, former Louisville star Riley Wheeldon out of British Columbia, Canada. With scores of 64-68-67, the former Musketeer, who starred at Xavier University, claimed the win in dominating fashion. His opening round 64 was just a shot off the course record and he finished the par 5’s at 10 under for the event. 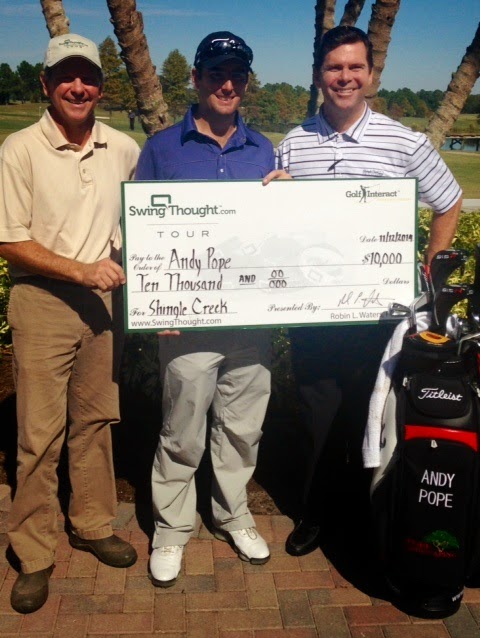 Pope, a member this year on the Web.com Tour, was the only competitor to score in the 60’s all three rounds. The $10,000 1st place prize was just shy of his largest check earned on the Web this year, $10,200 for a T15 finish at the WNB Classic. Pope finished 89th on the Web.com Tour money list and will be making his next start at Plantation Reserve in Plantation, Fla. for 2nd Stage of Web.com Tour Q School next week. With the win, Pope moves into third place on the SwingThought.com Tour Winter Series money list, behind Florida Southern alum Brian Richey and Georgia Southern alum Logan Blondell, both winners on the 2014 SwingThought.com Tour Pro Series. Blondell finished in solo 3rd at Shingle Creek, just a shot behind Wheeldon, he himself a Pro Series winner.

Wheeldon’s fellow Louisville alum, Sebastian Szirmak, of Toronto, Canada, carded a final round 64 to jump all the way into a tie for fourth with Malone University alum Justin Lower. Lower, himself a member of the Web.com Tour in 2014, is a past winner of the David Toms’ Award, given to the college player who has overcome the most adversity in his career.

Earlier in the week it was Web.com Tour member Rob Oppenheim, out of Andover, Mass., who captured the special 18-hole Sunday event by 2 strokes over former Georgia Tech star and Palmer Cup team member James White, Jr out of Acworth, Ga. Oppenheim shot 65 while White shot 67 and finished in solo 2nd. Delaware alum and 2014 SwingThought.com Tour Most Improved Award Winner Justin Martinson, out of Avondale, shot 71 and finished tied for 5th. With the win Oppenheim received free entry into the 3-day Shingle Creek $40,000 event in addition to the $1,000 1st place prize.

The SwingThought.com Tour would like to think the staff at Shingle Creek Golf Club for hosting such a great professional event! The SwingThought.com Tour Winter Series heads to Reunion Resort on the championship Nicklaus course next week for one and two day events to be held Monday November 17th and Tuesday November 18th through Wednesday November 19th at one of the premier facilities in the greater Orlando area. The winner of the 18-hole Monday event, in addition to a 1st place prize check, will receive a free entry into the 2-day event. Players do not have to compete in the Monday event to be eligible to compete in the 2-day event.

(Myrtle Beach, S.C.) – Guilford College alum Joseph Poplin, out of Eden, N.C., fired a final round 65 to catch first round leader Casey Johnson out of Martinez, Ga.  Johnson, who starred at Appalachian State, shot an opening round 67 and a second round 68 to leave him tied with Poplin at 135 and 9 under par for the 2 day event. Poplin shot an opening round 70 which left him tied for 5th after the first day.

The final round at Farmstead was scheduled to begin at 7:30 am but Mother Nature had other plans as fog blanketed the Calabash area. Play was suspended and unable to resume until 12:24 pm. With a late finish, and a playoff unrealistic due to darkness, Poplin and Johnson were named Co-Champions of the event and each collected $1635 for the win.

Johnson was also the winner of the One Day Shootout held Sunday, November 9 at Farmstead Golf Links where he shot 65 and ran away from the field. His nearest competitor was Canada’s Sean Bozuk who finished 6 strokes behind. For the win Johnson received free entry into the 2 day Farmstead event in addition to the 1st place prize check.

The SwingThought.com Tour and Co-Champions would like to thank John, Matt and the entire staff at Farmstead for all their help and for hosting the event. Up next for the Carolina Winter Series is Brunswick Plantation, with a special one day 18-hole shootout on Sunday, November 16th and a three day 54-hole event Monday November 17th through Wednesday November 19th. The winner of the 18-hole shootout will receive free entry into the 54-hole event in addition to the 1st place prize check.

For more information on the new SwingThought.com Tour or to join, visit swingthought.com or call 800-992-8748.
Posted by Blogger at 10:19 AM