(RICHMOND HILL, Ga.) – The $7 million-plus redesign of The Ford Plantation’s Pete Dye-designed golf course was unveiled to national media during a Nov. 7 – 8 showcase at the 1,800–acre sporting club.

The year-long project at the Richmond Hill enclave wrapped in September and has been open for member play since Oct. 1. Golf Digest has already named The Ford Plantation one of its Best New Courses for 2014. 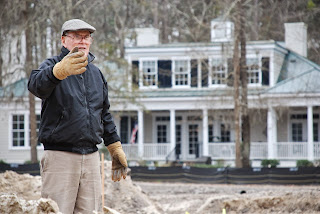 “I looked at The Ford Plantation as a unique chance and almost a blank slate,” Dye said of a course he originally worked on nearly three decades ago. “We wanted to come back and make the course better, and we’ve done that. The Ford Plantation golf course will stand among my finest Southern designs.”

“Pete is always passionate about his work, but it’s obvious that he feels a special connection with The Ford Plantation,” Liddy said. “It’s certainly among the largest redesigns of one his courses that he’s ever undertaken.”

The 88-year-old Dye’s strong presence was viewed as a bonus by Club officials, were happy to see a legend of the game at work up close.

More than 1.7 million square feet of Celebration Bermuda sod were laid during the project, as was a combined 58 miles of drainage and irrigation pipe. Green size has grown by 20 percent and 16,000 gallons of water per minute can be moved into surrounding freshwater lakes via a new high-powered storm water pump system.

The front nine at The Ford Plantation retained much of its former footprint and parkland feel, though landscape changes were introduced to widen corridors and create long views, a favorite technique of Dye’s.

The Lowcountry links-style back nine—site of a working rice fields for much of the 1800s—now includes bunkering and natural waste areas as part of an updated “high dunes” look and feel. Some 94,000 cubic yards of soil were moved during the project to achieve that result.

The Ford Plantation partnered with MacCurrach Golf Construction to manage the redesign. It’s the ninth time that the Jacksonville, Fla.-based firmed has worked with Dye on this type of project.
Posted by Blogger at 3:53 PM