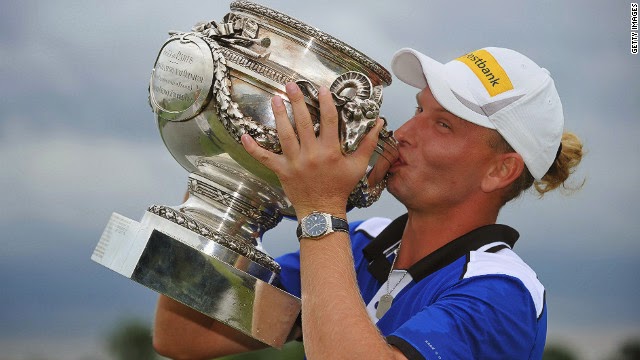 (CHICAGO) – Wilson Advisory Staff member Marcel Siem chipped in for birdie in a three-person playoff to capture the BMW Masters in Shanghai.

“I got off to a nice start with a birdie on the first and I knew with the windy conditions that it might be a better chance to win the tournament,” commented Siem, who went on to also birdie the seventh and eighth holes.

The German, who just added his fourth European Tour victory to his accomplishments, joined the Wilson Advisory Staff this past January, which was the kickoff of Wilson Sporting Good’s centennial anniversary.

“It’s extra meaningful joining the Wilson Staff brand and winning during their centenary year,” Siem explained. “I was able to represent myself and the brand at the U.S. Open this summer to compete for their 62nd major, a goal I still want to achieve.”

“Siem has been a positive addition to elevate our brand in the global arena,” adds Tim Clarke, President, Wilson Golf. “He is revered in Germany and all across Europe, and his momentum, charisma and fresh appearance are intriguing to Americans, too.”

Siem, gaining confidence that Wilson Staff will continue to provide solutions to help him play his best iron game, posted on Facebook, “I still can’t believe what happened today. I’m over the moon.”

Tournament Takeaways:
* Siem finished the week with a total of 23 birdies, which was third in the tournament.
* His win elevates his ranking to fourth in the European Tour Race to Dubai.
Posted by Blogger at 9:57 AM