(PALM BEACH GARDENS, Fla.) - Dr. Charles L. Sifford, the first African-American PGA member to successfully break through racial barriers and compete professionally on the PGA TOUR, will be awarded the Presidential Medal of Freedom on Nov. 24 by President Barack Obama. Established in 1963 by President John F. Kennedy, the Presidential Medal of Freedom is the nation’s highest civilian honor. 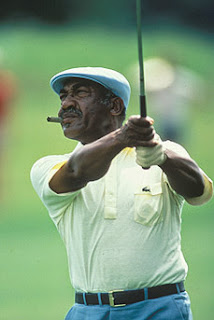 Sifford is often referred to as the “Jackie Robinson of golf” for his groundbreaking legacy in the sport, and it was Robinson who provided Sifford counsel throughout his career. Sifford went on to become the first person of color to compete in PGA-sanctioned events following the demise of the “Caucasian-only” membership clause in 1961. Sifford was inducted into the World Golf Hall of Fame in 2004 and was bestowed an Honorary Doctor of Law Degree by the University of St. Andrews in 2006.

This latest national recognition on behalf of Sifford, spearheaded by the PGA of America, was a collaboration among golf’s leading governing bodies, national diversity-focused organizations, government officials and sports figures. Among those involved in the effort were the PGA TOUR, United States Golf Association, World Golf Foundation, 64 Members of Congress and notable athletes that included Tiger Woods, Alonzo Mourning, Bill Russell and Jim Brown.

Sifford is the third golfer to be awarded the Presidential Medal of Freedom, following Arnold Palmer (2004) and Jack Nicklaus (2005).

“The PGA of America joins our friends throughout sports today in paying tribute to Dr. Charles Sifford upon receiving this prestigious honor,” said PGA of America Interim President Derek Sprague. “The hard-fought efforts and perseverance of Dr. Sifford continue to inspire our industry to evolve and elevate all efforts in diversity and inclusion. We must be mindful and proactive in creating meaningful opportunities for everyone to participate in this great sport.”

Born in Charlotte, North Carolina, on June 2, 1922, Sifford’s interest in golf began as a boy. As he made a living through caddying, he also had the opportunity to groom his golf skills. By age 13, he was shooting par golf. However, Sifford’s advancement was limited because of race discrimination in the Jim Crow era. Even though Sifford made significant strides in his career, he continued to be a target of harassment and death threats prior to and following the abolishment of the “Caucasian-only” clause.

“Dr. Charles Sifford is most deserving of this special honor,” said PGA TOUR Commissioner Tim Finchem. “He is the ultimate pioneer who endured untold hardships with tremendous dignity, courage and spirit, and he is a true role model who has provided inspiration to aspiring players of diverse backgrounds. We all owe him a debt of gratitude for helping to change our sport for the better. He is a true champion, in every sense of the word.”

Tom O’Toole Jr., president of the United States Golf Association, added: “Dr. Sifford’s courageous example helped open up the game to African Americans and stands as one of the most impactful golf stories of our time. His respect for the game and his fellow players, amidst great adversity, is an inspiration to us all.”

For over 50 years, the Presidential Medal of Freedom has been presented to more than 500 individuals who have made a significant impact to world peace, or to cultural or other significant public or private endeavors.
Posted by Blogger at 1:38 PM