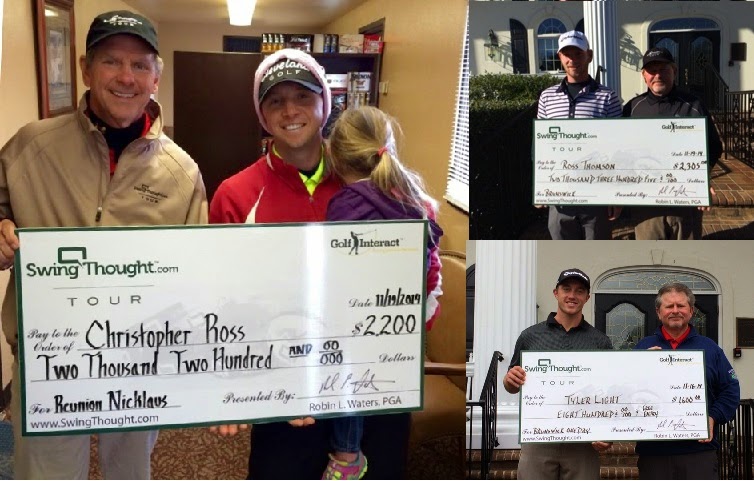 (Orlando, Fla.) – Eastern Michigan alum Christopher Ross, out of Ontario Canada, started his week off by capturing the SwingThought.com Tour 18-hole Monday event at Reunion Resort in Orlando for his eighth career win on the No. 3 tour in the United States. That win earned him free entry into the SwingThought.com Tour two day event held Tuesday and Wednesday at Reunion. The $225 Monday entry proved to be a great investment as Ross grabbed career win No. 9 with a seven-shot victory in the two-day event. The wins were the fifth and sixth of this year and the 3rd and 4th of this early Winter Series season.

Making matters more difficult for Ross, aside from the fact of being the player everyone is gunning for, was he came into the event with a serious neck injury. However he fought his way through the pain to shoot 70-70 for a 140 total and a seven shot victory over his nearest competitor, Jamestown, N.C. native, Travis Stewart. With the cold weather, windy conditions, and a sore neck, Ross knew the key to victory would be finding the center of the club face and solid putting. He accomplished both goals, especially with the putter, as he was rolling it well all week. Ross could concentrate on his ball striking, knowing if he found the putting surface, he had a high probability of making any putt. And make putts he did as he cruised to one of the widest margins of victory on the young season. With the win, Ross moved into fifth on the Winter Series Money List, trailing leader Brian Richey by just over $7,000 in earnings.

The SwingThought.com Tour will be off next week for the Thanksgiving holiday but will return to action Monday December 1st and Tuesday December 2nd through Thursday December 4th at the championship Disney-Magnolia Course, a former PGA TOUR host site. The winner of the Monday 18 hole event will receive free entry into the Tuesday through Thursday event, the third $40,000 guaranteed purse of the SwingThought.com Tour Winter Series season. Players do not have to play in the Monday event to play in the Tuesday through Thursday event and members and nonmembers are both welcome. Winter Series memberships are still available. Sign up now or miss out on a chance to bring home serious cash!

(Myrtle Beach, S.C.) – Charleston Southern alum Ross Thomson, out of Daniel Island, S.C., closed with final round 64 to capture the Swingthought.com Carolina winter series event at Brunswick Plantation held November 17 through 19. After an opening round 77, Thomson just wanted to post a solid round to make the cut. And post a solid round he did, shooting three under par 69. Thomson didn’t stop there, keeping the pedal to medal, posting a final round 64 for the win. The big story, even more impressive than the low comeback scoring, was the win came in only Thomson’s 2nd start as a professional. College of Charleston alum and multi-time SwingThought.com Tour winner Paul Brown, out of Hartsville, S.C., finished 2 shots back after a final round 4 under par 68. Brown continues to lead the SwingThought.com Tour Winter Series Money List. Charlotte’s Kevin McLister, who starred at Delaware and is also a multi-time SwingThought.com Tour winner, finished alone in 3rd.

Earlier in the week it was Malone University alum Tyler Light, out Massillon, Ohio, who held off Brown in the one day 18 hole event held on Sunday at Brunswick. Light shot 5 under par 67, one better than Brown’s 68, for the win, his first as a professional. Light, a regular on the 2014 SwingThought.com Tour Pro Series, has been knocking on the door all year. Light has had 16 top 20 finishes this year with 14 inside the top 10 and eleven inside the top 5 finishes. He has finished runner up three times and, in fact, his only finish outside the top 20 was a T33 in the season ending Woodcreek Classic. His stats this year have been nothing short of amazing and he was finally rewarded with his first win.

The Swingthought.com Tour Carolina Winter Series will be back in action November 30th with a one day 18-hole event at Aberdeen Golf Club in Longs, S.C. followed by a two-day 36-hole event at the championship course Dec. 2 and 3.

For more information on the new SwingThought.com Tour or to join, visit swingthought.com or call 800-992-8748.
Posted by Blogger at 11:10 PM