(Vero Beach, Fla.) - The 2015 championship runner-up will be the top seed in match play, as Pamela Kuong, 57, of Wellesley Hills, Mass., fired a 3-under-par 69 on Sunday to post a 36-hole score of 1-under 143 and earn medalist honors in the 57th U.S. Senior Women’s Amateur Championship by two strokes over 2004 U.S. Women’s Mid-Amateur champion Corey Weworski. 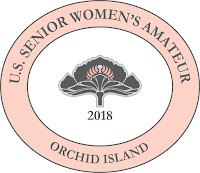 Kuong, who shot the lowest round of her competitive career on Sunday, attacked the par 3s during the second round of stroke play, birdieing three out of four on a windy morning at Orchid Island Golf & Beach Club. Starting her round on the 10th hole, she bounced back from a bogey-double bogey stretch on Nos. 17 and 18 to shoot an inward 32 and post a score that would stand up.

Martha Leach, the 18-hole leader after a 3-under 69 on Saturday, and reigning champion Judith Kyrinis, who was 2-under heading into Sunday, were unable to keep up the pace they had set during Round 1 in their afternoon rounds. Leach, the 2009 U.S. Women’s Mid-Amateur champion, struggled throughout the day, as the Hebron, Ky., resident carded a pair of double bogeys and five bogeys against just one birdie, to post 8-over 80.

Kyrinis, of Canada, opened her round by rolling in a 15-foot putt for birdie, and she also made a 5-foot putt for birdie on No. 1, her 10th hole of the day, but those were the only circles on her scorecard. Her tee shot on No. 4, her 13th, found the water, leading to a double bogey on a hole she had birdied on Saturday. She posted a 4-over 76 and will be the No. 3 seed in match play.

Three-time champion Ellen Port, of St. Louis, Mo., fired a 1-under 71 on Sunday, and was one of just four players to break par in Round 2, along with Kuong, 2005 U.S. Women’s Mid-Amateur champion Mary Ann Hayward (2-under 70) and 2017 Senior Women’s Amateur runner-up Terrill Samuel (1-under 71). Port’s chances of challenging Kuong for the top spot in match play all but ended on the par-4 10th hole when her approach shot found the water short of the green, leading to a double bogey. She made five birdies on Sunday to secure the No. 4 seed for match play.

Weworski, of Carlsbad, Calif., will be the No. 2 seed after posting a 36-hole score of 1-over 145. Her 73 on Sunday morning included two birdies against three bogeys.

Kuong fell in the championship match in 2015 to Karen Garcia, 1 up, at Hillwood Country Club, in Nashville, Tenn. Garcia, of Cool, Calif., also advanced to match play on Monday with a 36-hole score of 15-over 159.

Notable
-Kuong’s 36-hole total of 143 is the lowest in U.S. Senior Women’s Amateur stroke play since 2011 when Lisa Schlesinger posted 139 at The Honors Course in Chattanooga, Tenn.
-Nine out of the 11 USGA champions in the field advanced to match play. A 10th, 2009 U.S. Senior Women’s Amateur champion Sherry Herman, is in Monday morning’s 7-for-1 playoff for the final match-play spot.
-There was one eagle during stroke play, with Mary Gale, of Worcester, Mass., holing out with a 4-wood from 175 yards for a 2 on the par-4 14th hole on Sunday morning. It was part of one of the more impressive stretches for anyone in the field, as Gale, who missed the cut, played holes 12 through 16 on Sunday in 5-under, also making 2s, in those cases birdies, on Nos. 12 and 15.
-Vero Beach native Laura Carson finished stroke play with a score of 7-over 151, comfortably advancing to match play.
-This marks the third straight year that there will be a playoff to finalize the match-play draw. This follows a three-year stretch, from 2013 to 2015, in which exactly 64 players advanced and no playoff was necessary.
-Marianne Towersey, 67, of Pebble Beach, Calif., posted a 36-hole score of 13-over 157, advancing to match play for the 15th time in 16 U.S. Senior Women’s Amateur starts.

Quotable:
Pamela Kuong (1-under 143) on her performance on Sunday: “I was never really in between clubs, so that helped. I feel like I’m getting my lines down. Clearly, my putter was working really well today. Going out early, the greens were mint, so you could make a lot of putts. 70 is the lowest I had ever shot, [69] is definitely the lowest for me in any USGA event.”

Kuong on her mindset heading into match play: “There’s so many good players, so you know you’re just playing the golf course, and that’s all I’m going to do. I’m fortunate, I’ve been in enough of these, so I know what to expect. People can get hot really quickly.”

Sue Wooster (3-over 147) on what she has learned about the golf course: “I’ve played four rounds here, so I feel pretty familiar with the holes and how the course plays, and the little ins and outs and what you have to look out for with the different grasses and the grains. I’m feeling pretty comfortable and pretty confident. I tried to go for a few more pins today to prepare myself and get ready for match play. Anyone can play well in match play.”

Ellen Port (2-over 146) on her mindset heading into match play: “My mindset is to play the golf course, play the strategy and the shots that I’m comfortable with. My bad swings were results of a little indecision. That was it. My goal is to be committed to every shot that I hit.”

Corey Weworski (1-over 145) on playing in the wind: “I think I’m one of the longer hitters, so I don’t think it really affects me that much, though I’m hitting a lot of knockdown shots into the greens. The shorter hitters, they have longer clubs into the greens, but they still do well on this course, because the greens are so big, and they still hit them, so match play is going to be really interesting.”

Judith Kyrinis (2-over 146) on the possibility of medalist honors heading into Sunday: “I don’t worry about that, I just worry about knowing the course some more, getting some positive thoughts out there. It doesn’t really mean too much, you’re just trying to make sure you can keep up with some of your good play heading into match play.”
Posted by Blogger at 9:37 AM