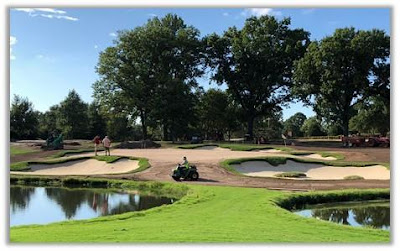 Among Heritage Links’s comprehensive project services will be the implementation of a new bunker style that will be very natural in appearance.  The change represents a stark contrast to the existing ordinary appearance that evolved over the years. Additionally, the bunkers will include Better Billy Bunker liners to improve drainage.  All of the greens will be rebuilt to USGA specifications utilizing GreenScan technology to replace the contours to their exact current elevations.  The new greens will feature PrecisionAire and hydronic heating/cooling systems in the subgrade.

The renovation is on track for a mid-December completion, and the course expects to reopen in June 2019. The construction work is being managed for Heritage Links by Agustin Sanchez.