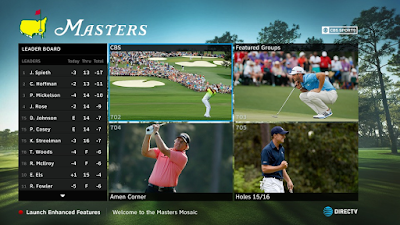 (RELEASE) - The 2016 Masters marks the 60th anniversary of its first live telecast coverage. So it’s fitting that the plush terrain of Augusta National Golf Club's hallowed grounds, and the pink hues of its signature Azaleas, will be the backdrop for another broadcast milestone: the first-ever live 4K Ultra High Definition (UHD) broadcast in the United States.

AT&T will deliver the 4K broadcast of the famed “Amen Corner” (holes 11, 12 and 13) on DIRECTV http://www.directv.com/technology/4k and customers with compatible 4K UHD equipment can view this special coverage of golf’s signature event during all four days of scheduled play on a new DIRECTV 4K channel (106).

AT&T’s DIRECTV and U-verse video services will offer three extra channels of tournament coverage through their exclusive “Masters Experience.” Viewers will follow all the action at the Augusta National Golf Club on a four-screens-in-one Masters Mosaic channel on DIRECTV and U-verse during all four days of the tournament, April 7-10. The Mosaic channels will share the screen with a continuously running leaderboard featuring live tee times, scoring and leaders’ locations on the course. Viewers can also access the interactive menu of enhanced features for an in-depth look at players’ scorecards, stats and bios.

Tournament coverage will also include the 2016 Masters Preview Show premiering April 4 at 3:30 p.m. ET on Audience Network, only on DIRECTV and U-verse. In this year’s preview of the Masters, defending champion and world #1 Jordan Spieth and Jason Day sit down to talk about their chances of winning this year's Masters while Rory McIlroy goes for the career Grand Slam.

Air dates and times are available on the channel guide at DIRECTV.com and at uverse.com.
Posted by Blogger at 11:23 AM