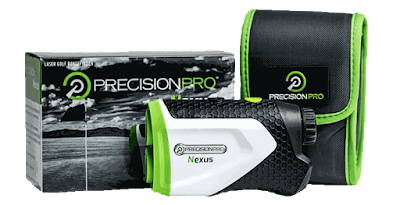 (Cincinnati, OH) - Precision Pro Golf will be an Official Sponsor of the Players AM Tour for 2016.

"The Players AM Tour is very unique," said Jonah Mytro, Co-Founder of Precision Pro Golf.  "In addition to providing a competitive tournament environment for amateur golfers to play in, they're giving something back to their local community. The fact that a percentage of each player's entry fee is donated to Second Harvest of Central Florida to feed needy families in the area is just awesome ... and we're very proud to be a Sponsor."

"The Players AM Tour is new and fresh, and we only look to partner with Sponsors that we feel are the same," said Rick Macali of the Players AM Tour. "Adding Precision Pro Golf as an Official Sponsor lends greater credibility and identity to our young Tour.  I can already see the excitement among our Tour Members about the Nexus Laser Rangefinder, and I know I'll see them using it on Tour soon."

About the Players AM Tour
The Players AM Tour was founded with a rebellious spirit and a lofty objective:  to offer competitive golf across every skill level on the best courses in the area at a fair price, while leading the way for socially-conscious people and businesses to fight hunger in America - all without a membership fee.

The Players AM Tour can be played by anyone with a handicap of less than 30. Because they offer different flights for different skill sets, no one is excluded. Truly, golf is one of the greatest lifetime sports available.

The Players AM Tour hosts events throughout the year, but the summer series, from March to October, is the real points race that will dictate the most consistent player in each flight. Following the last regular season event, they will host a 2-day Tour Championship.

The five flights are broken down by handicap groupings. Players compete for points and prizes only against players in their flight.

Players play for gift cards at each event, and for the season championship - there will also be a Tour Championship at the end of each season.  We will also offer second half winners to keep everyone involved throughout the year - so, if you get off to a bad start, you still have some targets to shoot for in the second half of the season.

How can hitting and chasing a ball around a field bring awareness to those 1 in 7 Americans that are food challenged each day? How can our Tour help 35 million children that go to bed hungry every night? What difference can a game of golf make to any of our 15 million seniors that have to choose between buying medicine or food on a daily basis?

The Players AM Tour will take a percentage of each players entry fee and put it in an account where we will give a donation to Second Harvest of Central Florida at the year-end Tour Championship. It may not be the whole answer, but we are trying to do our part with our player's participation.

For more information on Precision Pro Golf, The Nexus Laser Rangefinder or the GPS Golf Band visit www.PrecisionProGolf.com.
Posted by Blogger at 10:29 AM