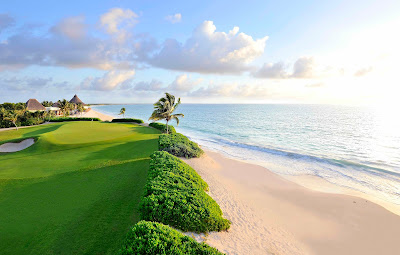 The Mayakoba Masters of Food, Wine & Golf kicks off the morning of Thursday, June 2, with a special clinic by master golf instructor, Jim McLean, on the Greg Norman-designed El Camaleon golf course, home to the only PGA TOUR event in Mexico: The OHL Classic at Mayakoba. That evening, a spirited opening party presented by Aeromexico and Delta Airlines at Rosewood Mayakoba’s outdoor Palapa will feature culinary delights and elixirs from an exciting array of guest chefs, winemakers, sommeliers, tequila masters and artisanal brewers that set the stage for the weekend’s festivities. Over the next three days, guests can participate in a series of exclusive dining events, grand tastings, celebrity chef cooking demonstrations, wine and spirit tastings, and after-hour parties held throughout the resort’s three luxury hotels; the chef’s of Banyan Tree, Rosewood and Fairmont Mayakoba will host the master guest chefs in their kitchens. For a full line-up of events, please visit mayakobamfwg.com.

“We look forward to welcoming such a celebrated gathering of chefs, wine and spirit masters to Mayakoba for our first Masters of Food, Wine & Golf,” says Carl Emberson, VP of Operations and Marketing for Mayakoba. “Foodies, oenophiles and golf enthusiasts alike will appreciate the specially-curated events that highlight the culinary and cultural bounty of Mexico but also bring an international flair to the Riviera Maya. It’s a unique way for our guests to experience the destination through food and wine, and we hope this is the first of many more events to come.”

The Mayakoba Masters of Food, Wine & Golf comes on the heels of several new food and beverage offerings to open at the resort in the last year. The latest addition is El Pueblito Cooking School, launching this spring. Classes will be scheduled throughout the year and offer guests a hands-on opportunity to learn traditional Mexican dishes and techniques in an interactive, gourmet teaching kitchen. The Cooking School will also offer private classes for individuals, families or corporate groups. An exciting line-up of celebrity guest chef classes will be announced later in 2016.

Additional programs play heavily on the local customs and indigenous ingredients of the Riviera Maya. Banyan Tree Mayakoba recently unveiled HAAB, an immersive outdoor dining experience that brings to life the ancient culture, customs and cuisine of the Mayan people. Rosewood Mayakoba also introduced La Ceiba Garden & Kitchen, an al fresco environment for guests to partake in cooking demonstrations, tastings and even foraging for their own produce from over 45 types of organic vegetation to create exquisite delicacies with unmistakable Mexican flare. At Fairmont Mayakoba, the new “Classics Perfected” cocktail menu – a global Fairmont program designed by its elite bartenders – is available at the newly- renovated Lobby Lounge. The updated Lobby Lounge features an entirely new beverage experience and menu complete with upscale appetizers and sampling dishes to share overlooking Mayakoba’s distinctive waterways.

Ticket prices for The Mayakoba Masters of Food, Wine & Golf start $1,199 per person (plus tax and service) and include 3-nights accommodations, airport transfers and access to golf tournament and all food and wine events. For more information or to purchase tickets, visit mayakobamfwg.com or contact Mayakoba at info@mayakoba.com or call +52 984 873 4900.
Posted by Blogger at 12:51 PM

This place is absolutely gorgeous, beautiful and stunning. Even though a few halls are equally appealing and fascinating in their decor, food and aesthetics, I'm tempted to still give this venue Houston a slight edge.