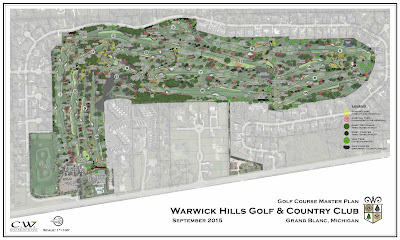 “The club’s goal is to chart the future of the golf course and create a plan that can be passed on from one leadership group to the next,” said Wilczynski, ASGCA, whose six-year-old firm C.W. Golf Architecture is fast gaining a reputation for economy and sensibility in course design. “Together we’ve devised a comprehensive document that enables the golf course at Warwick Hills to move forward in a cohesive fashion.”

Warwick Hills, a private club in Grand Blanc, Michigan, played host to the PGA Tour’s Buick Open from 1958-69 and again from 1978-2009. James Gilmore Harrison designed Warwick Hills’ original course, which opened in 1957. The following year it hosted the inaugural Buick Open, won by Billy Casper. The current layout is the product of a 1967-68 redesign by prolific golf course architect Joe Lee. Tiger Woods won the last (and his third) Buick Open at Warwick Hills in 2009.

Warwick Hills is among only a handful of Joe Lee courses north of the Sun Belt, and the only one in Michigan.

“Our membership is very proud of the Joe Lee design,” said John DeMarco, chairman of Warwick Hills’ Greens Committee. “Mr. Lee was friends with several Warwick Hills members who wintered in Florida. They persuaded him to come up and redesign the course.”

DeMarco and Wilczynski emphasized that the master plan for Warwick Hills does not call for a redesign of the course, but rather an update.

“We don’t want to move dirt all over the place,” said DeMarco. “But we recognize that nearly 50 years have passed since Mr. Lee was here. That’s a long time. Technology has changed in course maintenance, golf equipment and other factors. We thought it was time to look at the total picture, so we asked Chris to give us a hole-by-hole analysis with recommendations for improvement.”

The club already had worked with Wilczynski on an extensive tree management program, which enters Phase Two this Spring. Early on, Wilczynski recognized the potential for a cost effective architectural update that would elevate the golf experience at Warwick Hills. “As the tree project progressed, I kept offering ideas about how to tweak various holes. The membership already knew the club was due for a master plan, but they needed to see examples of how the course could be improved.”

DeMarco said the success of the tree management project strengthened the Greens Committee’s trust in the architect’s judgment. “Once we saw the results of the tree program, it clearly was a dramatic change,” said DeMarco. “That prompted us to get serious about pursuing a master plan.

“We were impressed with Chris’ professionalism when he presented his ideas, and how he expressed his vision to a membership that’s not always in agreement in matters like this. We didn’t look elsewhere (for a course architect to create the master plan).”

Wilczynski said he’s in favor of preserving most aspects of the Joe Lee design.

“The ‘bones’ of golf course are really solid,” he said. “The greens are outstanding and there’s a good variety of holes. We won’t be touching the greens, and none of the proposed work on fairways will be invasive.  Most of the work will involve reimagining the bunkering, adjusting fairway alignment and adding a variety of tees, as well as continued tree removal.”

Joe Lee learned his craft as an associate of renowned course architect Dick Wilson for 13 years before Wilson’s death in 1965, when Lee struck out on his own. He had a hand in designing more than 160 courses, most of them in Florida, between 1952 and his death in 2002. Lee’s old-South demeanor earned him the nickname “Gentleman Joe,” but his design philosophy had elements that weren’t always gentle.

“He was a fan of redundant hazards,” said Wilczynski, who pored over Lee’s construction notes for Warwick Hills. “Trees were purposely planted behind bunkers so players couldn’t advance the ball toward the green. I don’t agree with that philosophy – the game is hard enough.  Golfers should be given options, and redundant hazards take away options.”

Lee’s redundant hazards, which create what DeMarco calls “double jeopardy” situations, were exacerbated as trees grew, completely blocking all but sideways and backwards escape routes from many of Warwick Hills’ bunkers.

Under Wilczynski’s master plan, those trees will disappear. The master plan also calls for significant changes to the bunkering throughout the course, including the relocation or removal of bunkers that have become “irrelevant” to better players or are too vexing for the majority of Warwick Hill’s members, who play the course from 5,800 to 6,300 yards. It entails rebuilding more than 50 mostly greenside bunkers; removing and/or relocating 20 fairway bunkers; and creating 25 new fairway bunkers.

Wilczynski said the new bunker locations will be more visually appealing, will create more challenges for better players, and will prompt average players to think more about tee-to-green strategy. The new bunkering also will result in subtle changes in fairway angles and widths at many of the landing areas.

The intent, Wilczynski said, “is to widen the holes and make the layout more strategic and less penal. Width creates strategic options and different opportunities for angles into the fairway landing areas and greens.

“My design philosophy focuses on playability and aesthetics. The recommendations outlined within the master plan specifically address these design philosophies and the club’s goals and needs.”

“We’ll be adding quite a few forward and middle tees,” said Wilczynski, noting that Warwick Hills’ par 5 holes are especially long and difficult for the club’s women and senior members.  “Golfers often talk about equality, and I want the challenge to be equal regardless of what tees you play from. If you play from the blues, and I play from the reds, we both should have the opportunity to reach the green in the same number of shots.  The physical location of each tee plays a big part in creating an equal challenge from one hole to the next.”

Most of the new tee boxes will stand alone, as opposed to the current long strip tees that have multiple tee markers spaced along the length of the teeing ground. “Long strip tees were popular with course designers in the 1960s and ‘70s,” said Wilczynski. “They were great in terms of having room to move tee markers and avoid wear and tear, but there is a lot of unused teeing area that still requires care and maintenance.

Warwick Hills is in the process of deciding how to implement the master plan. “We don’t want to do it piecemeal,” said DeMarco.

Wilczynski agrees. “The sooner it’s finished,” he said, “the sooner the members get to enjoy it!”

For more information, visit www.cwgolfarch.com.
Posted by Blogger at 10:10 AM