Speaker of the House John Boehner Talks Golf, Politics, Presidents on Next Episode of Feherty 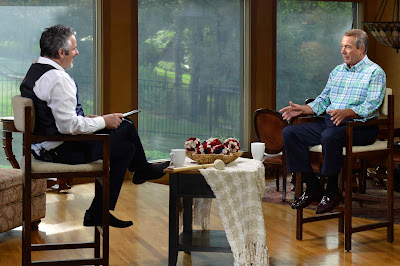 (ORLANDO, Fla.) – Speaker of the United States House of Representatives and avid golfer John Boehner sits down with David Feherty – one of the most recognizable and unique personalities in sports – for a wide-ranging interview about his life, career and love for golf on the next episode of Feherty, Golf Channel’s primetime interview series, Aug. 3 at 10 p.m. ET.

Shot at Muirfield Village in Dublin, Ohio, and from his office at the U.S. Capitol building in Washington, Boehner – a five-handicap prior to being named Speaker of the House – reflects on his passion for golf and life lessons learned from the game; his political career and future aspirations; and reveals his emotional side – “Boehner moments” as he calls them – when discussing children, the military and veterans. Feherty also spends time with Boehner walking the halls of Congress and visiting the office of the highest ranking official in the Legislative branch of government.

A native of Southwest Ohio, Boehner also discusses the honor in early 2015 of presenting the Congressional Gold Medal to his golf hero, Jack Nicklaus. He opens up to Feherty about future political aspirations – including the possibility of running for President – as well as his work to advocate for the American military both at home and abroad. He also recounts playing golf with the commanders-in-chief, including Presidents George H.W. Bush and George W. Bush, Bill Clinton, Gerald Ford and Barack Obama.

Select Boehner Quotes from the Interview:

On his golf match with President Barack Obama, Vice President Joe Biden and Ohio Governor John Kasich:
“It was Father’s Day weekend. The President and I had talked about playing golf but I never got the invitation. So after I became Speaker, the President finally gave me a formal invitation, and he told me, ‘It is going to be the Vice President and myself, and you bring a partner. So I bring my longtime friend, John Kasich, the Governor of Ohio.”

“President Obama shows up, we are getting ready to putt a few, and he says, ‘Boehner, you and I are partners. We are going to take these guys [Gov. John Kasich and Vice President Joe Biden] on. I thought John Kasich was going to cry. So the President and I whipped up on them pretty good and they paid up.”

“As soon as we got in the cart I said, Mr. President, just remember something, this is just golf.”

On Playing Golf in the Future with President Obama
“The President has suggested, ‘Hey, do you think it is too much trouble to play golf again?’ I have to look at him and say, ‘Yes, because everybody gets bent out of shape worried about what we are up to, when all we are really going to do is just play golf.’”

On Presenting Hall-of-Famer Jack Nicklaus with the Congressional Gold Medal
“I was proud of it. Difficult. The day we gave Jack the gold medal was an emotional day for all of us.”

“He was my hero. I have watched virtually every golf tournament on TV for the last 40 years. I don’t watch much TV but I watch a lot of golf. He was my hero, but he also is a big hero in Ohio and one of the greatest heroes golf has ever had.”

On Life Lessons Learned on the Golf Course
“Perseverance and Patience. Probably one of the secrets to my tenure as Speaker is just to be patient. Listen to everyone and try to understand. It takes an awful lot of patience.”

On how Boehner Wants to be Remembered
“Fair, decent and honest. I treat my colleagues – Democrat and Republican – the same. Nobody more open and transparent in Washington, D.C. than I am. At the end of the day, that is the way I ran my business and the way I run my political life. Just tell people upfront the facts and the truth.”

On why he Loves the Game of Golf
“Golf for me is more of an escape. It is an escape from all of the other things going on because when you are trying to hit that little white ball, you don’t have time to think about anything else.”

Emmy-nominated David Feherty, described as “a cross between Oprah Winfrey and Johnny Carson” by The New York Times as host of Golf Channel’s hit, original series, Feherty, conducts interviews both heartfelt and irreverent – a trademark of one of television’s most irrepressible personalities. Earning critical acclaim for his refreshing interviewing style, the self-deprecating Feherty employs his laid back approach when sitting down with the most recognized names in entertainment, politics and sports to bring out laughs and an often seldom seen emotional side from his guests. He also makes a habit of engaging in his guests’ favorite places and activities to help capture the location of each episode.