(ACME, MI) – With the completion of a $7 million renovation of guest rooms in its 17-story glass-encased tower, the Grand Traverse Resort and Spa has positioned itself solidly as a player in the top tier of national resorts competing for corporate, association and leisure business. 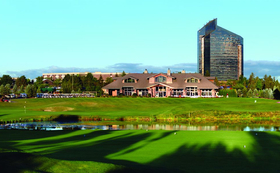 The remake of the rooms in the tallest building in Northern Michigan also caps a $34 million investment in improving all aspects of the facility by its owners, the Grand Traverse Band of Ottawa and Chippewa Indians.

Everything in the rooms, from bathroom fixtures, tile, window treatments, carpeting, and bedding were taken out and replaced in an updating that was based in part on feedback on the preferences of resort guests, said Timothy Norman, the resort’s general manager.

Norman said management is delighted with the reaction returning and first time guests have expressed about the improvements.

“The renovation has brought us up to date and will allow us to meet or exceed our guests’ expectations while at the same time giving Northern Michigan a product that competes nationally for both corporate and association business,” Norman said. “It also will give us a boost with the travelers or visitors we are trying to get to come to the region to experience the water, the wineries, the food, the golf, and all the other attractions that show we are just a great place to vacation. We are excited about what these rooms will allow us to target and promote for the future.”

The project was designed by Niemann Interiors, a Winter Park, Fla., firm with extensive design experience in the hospitality and hotel industry. The tower remained open as work proceeded floor by floor.

Even as the resort celebrates the tower’s revival, Norman said he is deep into plans about what comes next.

“When you have over 900 acres and 186 tower rooms you are never done. There is always something else to be done,” he said. “We are already in the works for next year’s plans. We are in the middle of working with ownership on a five year plan so we are always revamping and looking at what’s next and we are working on next year’s budget right now, setting those goals, and deciding what areas we are going to next work on that are not guest rooms.”

The attention to the tower rooms comes after a two-year stretch of renovations of the other original 240 hotel rooms in the six-story section of the complex where $2.7 million was spent on new carpet, bedding, furniture, and flat screen televisions. In addition fire suppression sprinklers were installed throughout that part facility to bring it up to local code requirements that were not in place when the hotel was built.

Every area of the resort, from a $4 million reconfiguration and rebuild of the parking lot, to new cart paths and other improvements on the golf courses, has seen upgrades.

While those improvements visitors can readily see, other expensive technological advances such as three miles of underground fiber-optic cable installed throughout the property improved high speed Wi-Fi internet access for guests.

“We put in a whole new fire sprinkler system, one that did not exist in the old hotel,” Norman said. “An entirely new heating and cooling system was installed for the tower. Although those are things that guests don’t necessarily touch and feel they are million dollar expenditures.”

“The ownership has demonstrated over the past 11 years that year in year out they are committed to maintaining and improving the resort,” Norman said. They continually reinvest in the product and have committed every year with the budget to maintain a minimum level of improvements and every few years they have approved a big expenditure like the tower renovation.”