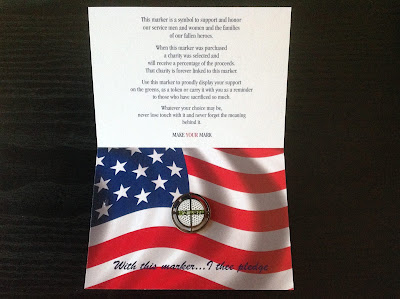 (Milford, DE) – Sniper Putters, a relatively small golf equipment company that burst on the scene a few years ago with a line of flatsticks with names such as Rebel, Engage and Ambush, is once again making some noise but this time with a national charity program called Make Your Mark whose objective is to raise funds for military families.

“Make Your Mark is a personal effort to honor and give back to our military heroes, with a special focus on the families of our fallen soldiers,” said Dan Roland, CEO of Sniper Putters.  “I created a special ball marker and I hope to hit the one million dollar mark and then raise the bar to achieving the sale of perhaps 10 million markers to be able to provide funds to the families of men and women who made the ultimate sacrifice for our freedom.”

The Make Your Mark medallion is both a keepsake and a reminder of the brave men and women who put their lives on the line each and every day serving our country. And you don’t have to be a golfer to support this cause.  The marker may be purchased as a gift item or even left behind at a restaurant for a waiter or waitress. In fact, Roland is hoping that there will be many situations where the marker is given away and people will share via video how they are “making their mark” – to honor our military.

According to Roland, Make Your Mark could be even bigger than last year’s Ice Bucket Challenge or Pay It Forward campaign if enough people get behind it and purchase the special ball marker for a friend, a co-worker, a golf partner or even for customers. Roland also is speaking to major car manufacturers and encouraging them to designate a special charity-focused month whereby they give a marker to everyone who purchases a new car.  Other businesses will be approached to take part in this initiative.

The commemorative medallion ball markers cost $9.95 for the size of a quarter or $12.95 for a half-dollar size. Proceeds from the marker sales will go directly to military related charities, including the Chris Kyle Frog Foundation, Wounded Warriors, Folds of Honor or a registered military charity of one’s choosing.  To order the marker, please visit www.sniperputters.com or email Dan Roland at Info@sniperputters.com.

The Make Your Mark campaign is hoping to receive photos, videos and stories of how people are “making their mark” by giving away markers as a national message to remember and support our troops.
Posted by Blogger at 6:13 AM