A Renewed Appreciation for Tom Watson 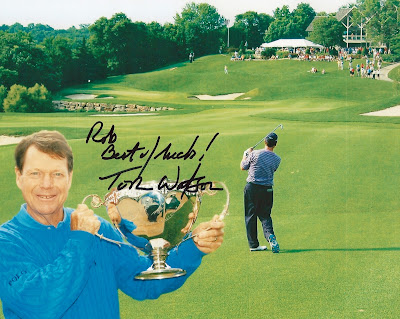 A friend of mine in the golf industry, Alan Hoskins of Kansas City, knew I was a Tom Watson fan and went out of his way to get the Hall of Famer to get this autograph for me. It will always mean a great deal to me.

Now, it seems as though Watson has been thrust into my day-to-day world once again. Considering the beginning of my interest in golf coincided with some of Watson's finest years on Tour, he quickly became my favorite player to watch. While I continued to watch him over the years, memories of his greatness faded - with a brief reminder during his run at the 2009 Open at Turnberry.

Then came the 2014 Ryder Cup. The loss should certainly be shouldered by the players, but many stories coming out of the event reflected so negatively on the man I used to worship. He, of course, handled everything with class and dignity, right down to the open letter posted on the Ryder Cup website.

Lately, I've seen nothing but positive stories about Watson, which I love. There was his farewell at The Open - ironically taking place at the Old Course at St. Andrews, a course on which he didn't claim any of his five Open Championships. I've been reading "The Secret of Golf - The Story of Tom Watson and Jack Nicklaus" and, while waiting at the hospital the other night, read Alan Shipnuck's recent Sports Illustrated feature.

I hope today's young golfers have an opportunity to watch Watson and take the time to learn more about the player and man.
Posted by Blogger at 10:40 AM