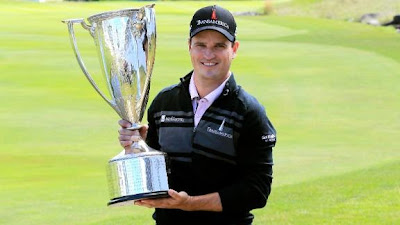 (Fairhaven, MA) - In golf, there’s nothing like the feeling of being in complete control of every shot.  Titleist Brand Ambassador Zach Johnson had that feeling on Monday, where he relied upon the Pro V1x golf ball and a bag full of Titleist equipment to win the BMW Championship.

Johnson was in total control of his game, playing the final 31 holes bogey-free and closing with a 6-under par 65.  His 16-under par 268 victory total was two shots clear of his nearest competitor.

It was a milestone win for Johnson, who earned the 10th title of his PGA TOUR career.  The victory also vaulted Johnson to No.4 in the FedExCup standings entering this week’s finale at East Lake in Atlanta, putting him in position to earn the $10 million FedExCup Playoffs bonus, golf’s biggest prize, with a win.

TOUR/BMW Championship: Of the select 70-player field, 44 (63%) relied upon Titleist golf balls, more than six times the nearest competitor with 7 … Titleist golf ball loyalist and Conway Farms member, Luke Donald, made four straight birdies on the back nine to finish with a 66, enabling him to go from No. 64 to No. 29, and secure a position in the 30-man field for the fourth and final leg of the FedExCup Playoffs … Titleist players have now won the first three Playoffs events, including Adam Scott at The Barclays and Henrik Stenson at the Deutsche Bank Championship … Titleist golf ball loyalists occupy 16 of the top 30 positions in the FedExCup standings, including nine full product line ambassadors, four of whom are among the top seven (Adam Scott/3rd, Zach Johnson/4th, Steve Stricker/6th, Graham DeLaet/7th) … Titleist Pro V1x loyalist Henrik Stenson enters the finale in 2nd position …  In addition to golf balls, Titleist was also the top choice in irons (18), wedges (63) and putters (23) at the BMW Championship.

EUROPEAN TOUR/KLM Open: Of the 156-player KLM Open field, 108 (69%) players relied upon Titleist golf balls, more than five times the nearest competitor with 19 … Titleist Pro V1x golf ball loyalist Joost Luiten, a native of The Netherlands, won in his home country following a par on the first hole of a sudden death playoff … It marked Luiten’s third career victory, including his second this season (Lyoness Open) … Both playoff participants finished regulation at 12-under par 268, three strokes clear of their nearest competitors … Luiten finished 2nd in this event in 2007 … Quoting Joost: "I don't know what it means for Dutch golf but I think it's pretty big.  Maarten Lafeber won it in 2003 and that was huge, and to have another Dutch winner now I think it will help the game here and hopefully we can create more Dutch winners for this tournament." … In addition to relying upon the Pro V1 golf ball, Luiten also trusted a full complement of Titleist golf clubs for his success, including the 913D2 driver (7.5), 913Fd fairway metal (13.5), AP2 2-iron, CB irons (3-PW), Vokey Design SM4 sand (54) and lob (60) wedges, Scotty Cameron R&D Concept 2 prototype putter … The win marks the 18th by Titleist golf ball loyalists on the 2013 European Tour, more than four times the nearest competitor with 4.

ASIAN TOUR/Yeangder TPC: Of the 147-player field, 91 (62%) players relied upon Titleist golf balls, more than three times the nearest competitor with 27 … Thaworn Wiratchant trusted the Pro V1x golf ball to victory, earning his unprecedented 16th Asian Tour title … Wiratchant closed with a 4-under 68 to finish with a 13-under par 275 victory total … Overnight leader and fellow Pro V1x loyalist, American Chan Kim, closed with a 2-under 70 to finish one shot behind the champion … The 23-year-old Kim, who won the Asian Tour's Q-School in January, also relied upon Vokey Design sand and lob wedges for his success … Seven of the 11 players who finished among the top 10 and ties relied upon Titleist golf balls for their success.