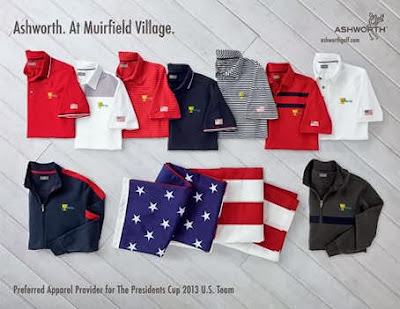 (CARLSBAD, CALIF.) – Ashworth Golf, an authentic brand dedicated to bringing modern style to the golf course, will be the official apparel supplier of the U.S. Team at The Presidents Cup 2013, to be held on October 1-6 at Muirfield Village Golf Club in Dublin, Ohio. In addition to the 12 playing members of the U.S. Team, Ashworth Golf will also outfit Team Captain Fred Couples and his two captain’s assistants.

The U.S. Team’s uniforms will feature a collection of seven uniquely-designed golf shirts embodying the patriotic colors of the United States in carmine (red), white and navy blue. In addition, each member of the team will be presented with two layering pieces in dark grey heather and navy.

Couples, captaining The Presidents Cup for the third time in his illustrious career, played a primary role in the selection of the fabrics, styles and prominent colors of each piece in the collection. Throughout the process, Couples sought to incorporate his favorite design elements from apparel worn throughout his career.

“It’s an honor to play for the United States at The Presidents Cup, and it was important to me that my players represented our country in premium shirts that are comfortable, look great and fit properly,” said Couples, U.S. Team captain and Ashworth brand ambassador. “The specially designed Ashworth pieces tell that story, and I’m proud the team will be wearing them on one of golf’s biggest stages.”

This year’s event marks the 10th Presidents Cup, created to give the world’s best non-European players an opportunity to compete in international team match-play competition. A biennial event played in non-Ryder Cup years, the United States has won four consecutive and holds a 7-1-1 overall record.

Beginning October 1 and throughout the tournament, the special edition Presidents Cup apparel collection by Ashworth Golf will be available for purchase in the on-site merchandise tent as well as AshworthGolf.com.