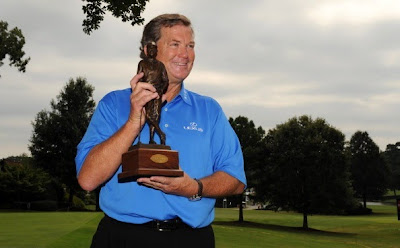 (HUNTINGTON BEACH, CA) – Srixon congratulates staffer and spokesperson Peter Jacobsen for being named the 2013 winner of the Payne Stewart Award. Jacobsen, known for his passion and personality throughout his 37-year PGA TOUR and Champions Tour careers, will be honored tonight during a private reception as part of the festivities at the TOUR Championship by Coca-Cola, the culminating event of the FedExCup Playoffs.

The Payne Stewart Award is presented annually to a professional golfer who best exemplifies the values of character, charity and sportsmanship. The past winners have all distinguished themselves through their respect for the game, the TOUR’s tradition of charity and their ability to make a positive difference in the lives of others. Stewart, an 11-time winner on the PGA TOUR and World Golf Hall of Fame member, died tragically the week of the TOUR Championship in 1999.

“I am incredibly humbled to receive such a prestigious award, particularly one that honors a dear friend of mine who was such a remarkable and esteemed individual,” said Jacobsen. “I was extremely lucky to have Payne as a friend, competitor and role model and the best way to carry on his legacy is by upholding the same values he did. Payne taught us all the meaning of sportsmanship and integrity, and I can only hope to pass that on to younger generations the way he did.”

Jacobsen, 59, made his PGA TOUR debut in 1977 and won seven times during his career. Jacobsen also collected 10 other victories, participated on four national teams and has won twice on the Champions Tour. Jacobsen’s most successful year on TOUR came in 1995 when he brought home two PGA TOUR victories and represented the USA in both the Ryder Cup and the Dunhill Cup. Jacobsen served as a player director on the PGA TOUR Policy Board in 1983, 1985, 1992 and 1994.

Jacobsen’s impact in the golf world has been felt outside the ropes as well. He started his work as a golf commentator for ABC-TV, covering the Skins Game throughout the late 80s and early 90s. He covered the 1991 Ryder Cup matches for NBC Sports and, in 2011, joined their golf broadcast team. He also had two shows on the Golf Channel for three seasons each: “Peter and Friends” and “Peter Jacobsen Plugged In.”

In 1989, Jacobsen established Peter Jacobsen SPORTS, LLC, a sports marketing and management firm. Since its inception, the firm has produced more than 250 events worldwide, including the CVS Caremark Charity Classic in Rhode Island. Jacobsen has also served as a principal of the Jacobsen Hardy Golf Course Design Company since 1995, and has co-designed more than 10 golf courses across Oregon, California, Washington, Florida and Texas. Over the last two decades, Jacobsen has written and released two books, “Buried Lies: True Tales and Tall Stories from the PGA TOUR” and “Embedded Balls.”

Jacobsen’s connection to Stewart extended beyond the golf course. The pair, along with Mark Lye, formed the band Jake Trout and the Flounders in the 1980s. The band released two albums, the first in 1988 and the second in 1999, shortly before Stewart’s untimely death.

Giving back to local and national communities has always been incredibly important to Jacobsen, and he feels particularly connected to nonprofit organizations that focus on children’s health and education and to organizations that work to improve the quality of life for military veterans. Over the years, he has given his time and resources to support nonprofits such as Devin’s Destiny, The First Tee, Folds of Honor, Juvenile Diabetes Research Foundation, Lines for Life, Summit Golf Foundation and Wounded Warrior Project.

Since 1989, Peter Jacobsen SPORTS-managed events have contributed more than $40 million to various nonprofits around the United States, including Albertina Kerr Centers, Doernbecher Children’s Hospital, I Have A Dream Foundation, March of Dimes, Randall Children’s Hospital and The First Tee.

Jacobsen and his wife Jan have been married for 37 years and have three children and two grandchildren.

For more information on Srixon, Cleveland Golf and Never Compromise or their staff players, visit www.clevelandgolf.com, www.srixon.com, and www.nevercompromise.com.
Posted by Blogger at 11:02 AM