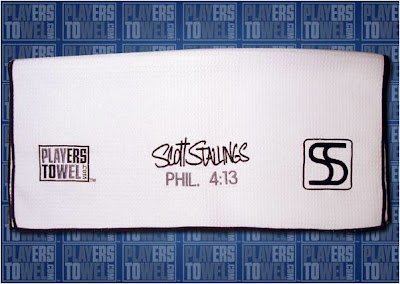 'Players Towel is the best towel on tour, hands down!' - Scott Stallings, after his second PGA Tour victory

“I would like to congratulate Scott Stallings on his second PGA Tour victory,” said Patrick Le Vine, founder of the Players Towel. “Scott played great golf the entire week as his tournament record 24 under 264 score at Annandale Golf Club indicates.”

In only his second year on tour, Scott is the first player from last year’s rookie winners to win in 2012. The six rookie winners in 2011 is a PGA Tour record dating to 1970.

Played under hot, humid conditions in Madison, Mississippi, the Players Towel continues to be a vital piece of equipment to keep ones hands and clubs dry and free from dirt and debris.

“With 15 victories on tour so far this year, the Players Towel has clearly established itself as the leading towel on every professional tour-bar none-for the world’s best players and their caddies,” added Le Vine.

Players Towels are sold on line at www.playerstowel.com and at leading pro-shops and resorts around the world.