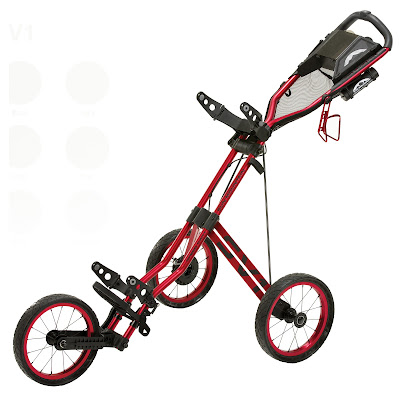 (Missoula, Montana) – The August issue of Golf Digest magazine includes the Golf Push Cart Hot List. For this Hot List, the editors tested a dozen pushcarts and found seven that stood out. Two of those seven standouts are the Sun Mountain Speed Cart SV1 three-wheeled push cart and the four-wheeled Sun Mountain Micro-Cart.

About the Speed Cart SV1 the Golf Digest Equipment Editors said, “We love the roll of the big wheels and the brackets that secure your bag without straps.”

New for 2012, the SV1 looks very similar to the company’s past Speed Cart offerings, but closer inspection reveals several upgrades. The totally redesigned console for the SV1 is divided into three separate sections that allow one to separate and divide various electronic devices and accessories. This new console also conceals a slide-out tray for scorecard and pencil. SV1 also comes standard with a cargo net that sits below the console and offers a convenient place to hold head covers or a layer of outerwear.

Additional improvements on the SV1 include the new E-Z Latch System to allow easier folding, unfolding and handle height adjustment; solid foam tires with anodized wheels to match the color of the frame; and a new brake system that replaces the former caliper brake with a new pin system to more securely lock the wheels in place.

Regarding the four-wheel Micro-Cart the story reads, “This four-wheel pushcart is stable and surprisingly light, and it quickly folds into a compact size.” To put some numbers to these words – Micro-Cart was the lightest golf push cart tested, weighing in at 13.8 lbs. and the cart folds to the miniscule 52 cubic inches.

The article quoted pro golfer Jenny Suh who uses a Sun Mountain push cart on the Symetra Tour as saying, “I used to think these were for people with back problems, but even I feel less tired after my round. Playing 36 holes is no problem.” Joining the Symetra Tour in allowing the use of golf push carts in competition include the IJGT (International Junior Golf Tour), the AJGA (American Junior Golf Association), NCAA Women’s Golf, and High School girls’ golf.

Sun Mountain’s Speed Cart was a revolutionary introduction in 1999. Golfers were presented with an ergonomic, foldable, three-wheeled push cart that required no assembly. It was sturdy, perfectly balanced, and it positioned golfers’ backs, arms and shoulders in their most natural positions. Sun Mountain has continually improved upon and added to its line of push carts to now include the collection of three-wheeled Speed Carts and the four-wheeled Micro-Cart.

For 30 years Sun Mountain has been a pioneer in the golf industry, revolutionizing golf bags, golf outerwear and golf carts. Sun Mountain's many innovations, including the first lightweight golf bag and modern stand bag, have made it the top golf bag company in North America. Within golf outerwear, Sun Mountain redefined golf-specific performance first with the windshirt, then fleece, and again with its four-way stretch, waterproof, and breathable rainwear. The Sun Mountain Speed Cart golf push cart transformed walking carts and created an entirely new category of golf products. Sun Mountain's "Ahead of Time Design" motto drives the company to continually design and refine golf equipment.