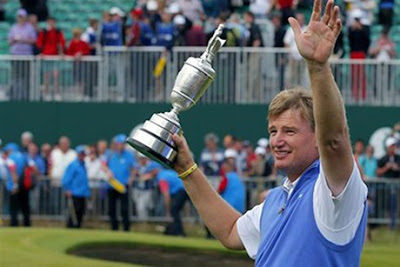 (PALM BEACH GARDENS, Fla.) – Open Champion Ernie Els, who captured his fourth major championship during a stunning chain of events over the closing four holes at Royal Lytham & St. Annes, has become the third player to earn a berth in the 30th PGA Grand Slam of Golf.

The 42-year-old Els knocked home a 15-foot birdie putt on the 72nd hole Sunday (July 22) at Royal Lytham & St. Annes in Lancashire, England, to pull within one shot of leader Adam Scott. Els then waited as Scott made a bogie on 17 and missed a par putt on 18 to force a playoff, giving the World Golf Hall of Famer his second Open Championship to go with two U.S. Open titles.

It will mark Els’ fourth trip to the season-ending showcase event that boasts the most difficult qualification requirement in the game – a major championship. The PGA Grand Slam of Golf will be televised by TNT to a worldwide audience.

“Amazing,” said Els. “I’m still numb. It still hasn't set in. It will probably take quite a few days because I haven’t been in this position for 10 years, obviously.  So it’s just crazy, crazy, crazy getting here.”
Els tempered his celebration, paying tribute to Scott.

“First of all, I feel for Adam Scott. He’s a great friend of mine,” said Els. “We both wanted to win very badly. But you know, that’s the nature of the beast. That’s why we’re out here. You win, you lose. It was my time for some reason.”

The final member of the foursome for the 30th PGA Grand Slam of Golf will be the winner of the 94th PGA Championship, Aug. 9-12, at The Ocean Course in Kiawah Island, S.C.

TNT’s prime-time broadcast of the event reaches a worldwide audience of 88.9 million U.S. homes and international viewers in more than 100 countries.

The PGA Grand Slam of Golf is hosted by the Bermuda Department of Tourism, Port Royal Golf Course, and the Fairmont Southampton Hotel.