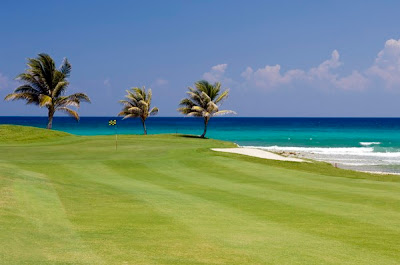 Work included:
• Expanding the right-front portion of the first green to create a flatter, fairer pin position, and widening the back half to more appropriately reward players attacking the par 5 with second shots

• Stretching the back of the par-4 fifth green to the edge of the Caribbean Sea, bringing water into play on three sides and returning the "bite" to one of Cinnamon Hill's signature holes

On the back nine, a new white tee was built on the par-5 18th hole. The 30 extra yards have revived its "risk-reward" features, as a putt for eagle now requires an aggressive line off the tee and solid second shot to carry a ravine protecting the green.

"Our modifications to Cinnamon Hill have further improved its already impressive shot values and overall playing experience," says Robbie Ames, Director of Golf. "Come join us to see how Cinnamon Hill captures Jamaica's unique vibe and creates a 'must play' for golfers of all abilities."

"Stay and play" packages that include golf at Cinnamon Hill and accommodations at the neighboring, all-inclusive Hilton Rose Hall Resort & Spa are available. Rates begin at $953 per person (based on double occupancy).