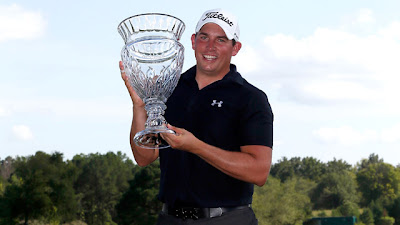 (Fairhaven, MA) – Establishing themselves as some of golf’s brightest young stars, Scott Stallings, Jason Bohn, Billy Horschel and Bud Cauley finished one through four, respectively, on the True Life Classic leaderboard this weekend.

The 27-year old Stallings shot a final round 4-under 68 to capture the event by two shots over fellow Titleist Brand Ambassador Bohn.  Both players fired four consecutive rounds in the 60s, with the champion posting consecutive 64s on Friday and Saturday to take a one shot lead going into Sunday.

Stallings, who made back-to-back birdies on the 70 and 71st holes to separate himself from the field, finished with a 24-under 264 victory total, a tournament record at Annandale, which has played host to the tournament since 1994.  The win marked the second of Stallings' career, with his first coming just over a year ago at The Greenbrier Classic.

Titleist was also the field favorite in the wedge (104) and putter (54) categories.

Bohn was first in Strokes Gained Putting (2.639) and Putts Per Round (24), and second in Putts Per Greens in Regulation (1.568) relying upon his Scotty Cameron 350 GSS putter.

Titleist golf ball loyalists accounted for 86 players in the 156-player British Open field, more than four times the nearest competitor with 19.  Titleist was also the top choice in irons (33) and wedges (123).