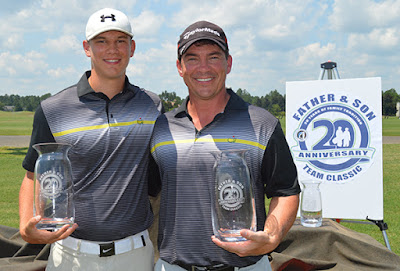 Family Golf Week, held annually in Myrtle Beach, S.C., will feature the Father-Son and Parent & Child Team Classics, two distinct events with the same goal – to celebrate the bonds between golf and family. Both tournaments will be played July 18-21.

As part of the sponsorship, players will receive a dozen Srixon golf balls, and Srixon/Cleveland will sponsor the always anticipated Family Golf Week Demo Day on July 18, allowing players to test the company’s newest offerings, and the Skills Challenge on July 19.

"We are thrilled to partner with the Family Golf Week team for this fantastic week of events," said Mike Powell, President of Sales and Marketing for Srixon/Cleveland. "The decision to support this event was easy as there is a natural fit with family and golf, and the enjoyment to playing in a special place like Myrtle Beach. We at Srixon/Cleveland Golf/XXIO hope to play a small part in the memorable times had between fathers and sons and parent and child teams at this year's event."

“We are excited to welcome Srixon/Cleveland to the Family Golf Week team in 2018 and beyond,” said Mike Buccerone, president of East Coast Golf Events. “The partnership between one of the game’s premier ball and club companies and the celebration of the bonds between golf and family is a natural one. Our players will be thrilled to receive a dozen Srixon balls and have the opportunity to experience the latest and greatest equipment from Cleveland.”

The Father-Son Team Classic is the largest tournament of its kind in the world, annually attracting 600+ players from 40 states and three countries to Myrtle Beach.

Early entry fee for both events is $995 per team and includes three rounds of golf, daily lunch, pre- and post-event functions, and a gift bag valued at $600. Included among the gift bag items is a $150 tournament gift card for each player that can be used at host courses for food, merchandise and pre-tournament practice rounds. Players will also receive a logo’d polo shirt, a dozen Srixon golf balls and more.

The 54-hole tournaments will be played on several of Myrtle Beach’s best courses, including TPC Myrtle Beach, Rivers Edge and the Fazio Course at Barefoot Resort, all layouts that have been ranked among America’s 100 Greatest Public Courses. Joining the top 100 layouts as host courses are Crow Creek, which just installed new bentgrass greens, Legends Resort and Wachesaw Plantation East, a four-time host of a LPGA event.

Both events, which require participants to have a USGA approved handicap, will feature a different format of play each day, starting with a two-person captain’s choice followed by better ball and alternate shot.