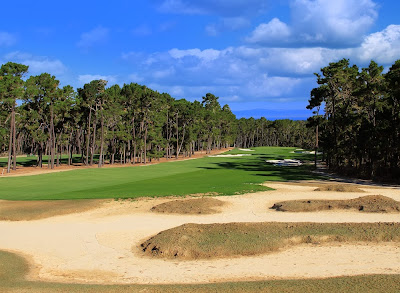 (Palo Alto, Calif.) - Passport pages are quickly filling up at the golf architecture firm of Robert Trent Jones II as principals in the company travel across the globe to keep up with new work.  The heart of this activity is occurring in South America, where two exciting projects are drawing golfers’ attention to the region.

In Argentina, RTJ II has begun construction of the new 18-hole Rio Hondo Golf Club, part of a government-sponsored project to create a high-end touristic zone for discriminating travelers.  The sandy site, featuring wetlands and lagoons adjacent to the Hondo River, makes for a very naturalistic golf layout that flows with the land.  In Columbia, the firm has completed the second nine holes of the Mesa de Yeguas Country Club, near Anapoima, which will officially open as an 18-hole layout in December.  The course offers great drama and stunning views; it is situated along the huge valley of the Bogota River with many holes playing along high cliff-top plateaus.

Closer to home, in Pebble Beach, California, Robert Trent Jones II is just completing the construction phase of a complete rebuilding of renowned Poppy Hills Golf Course, a must-play venue on the Monterey Peninsula.  RTJ II, in partnership with the Northern California Golf Association, greatly reduced the amount of irrigated turf to conserve water and introduced transitional zones of sandy areas between turf and forest, lending the course a rugged, more natural feel and more width for greatly enhanced playability.  It is an example of Jones’s leadership in the area of water conservation and environmental responsibility.

The company has also finished grassing the SentryWorld Golf Course in Stevens Point, Wisconsin.  A winner of Golf Digest’s best new course award when it opened in 1987, the layout has undergone extensive upgrading to drainage and irrigation to bring it up to modern standards.  The RTJ II team created four entirely new holes, enhanced the parkland experience by thinning overgrowth, and re-strategized options from the tees while offering more opportunities to play shots along the ground near the greens.

RTJ II has also completed its multi-phase renovation of The Wisley near London, England.  This project presents an example of how a thorough master plan can allow courses to accomplish complex goals within set budgets while still remaining open for play.  Jones’s work at The Wisley delivered firmer, faster, more easily-maintained turf by sand-slitting the fairways, brought the nearby River Wey into play, and otherwise improved conditions on three nines over several years.  Robert Trent Jones, Jr., says of the project, “Our work at The Wisley shows what a forward-thinking facility can accomplish through a well-crafted master plan created in consultation with highly-experienced golf course architects.  Members never lost a day of golf while we improved conditions and brought their golf holes into the modern era.”

In other news from Robert Trent Jones II, founder and master architect Robert Trent Jones, Jr. delivered the keynote speech to the Club Managers Association of China as the company’s second course at Changbaishan, north of Beijing, nears completion.  Jones’s 36 holes there compliment a resort and religious pilgrimage site in mountainous terrain separating China from North Korea.  This quarter also saw Robert Trent Jones, Jr. recognized by the University of Washington with a scholarship fund named in his honor.  And Jones was named by Links Magazine as one of the top 25 architects of all time, in the recent issue that also featured a story about the firm’s Chambers Bay Golf Course, in Pierce County, Washington, which will host the U.S. Open Championship in 2015.