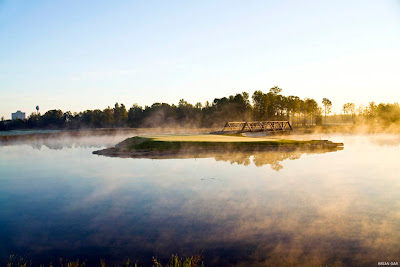 The 2008 golf season was highlighted by the introduction of Michigan’s most-anticipated golf course – Sweetgrass Golf Club at the Island Resort & Casino.

Set amongst the pristine landscape of the Upper Peninsula, Sweetgrass is owned and operated by the Hannahville Indian Community, a band of the Potawatomi Nation. The wind-swept fairways are lined with flowing fescues and the namesake herb sweetgrass – an aromatic, sacred plant used in Indian peace and healing rituals can be found throughout the property.

The Paul Albanese design stretches to 7,300 yards from the tips and challenges the top golfers from the back tees, while four forward tee boxes are in place to accommodate any level of golfer. Albanese drew inspiration from the tribe's heritage and incorporated it into the championship course’s design. From bunkers named after tribal elders to areas reminiscent of long-forgotten fortress ruins, Sweetgrass offers legend and inspiration on every hole.

Known as the Keepers of the Fire, the Tribe also honors legend by featuring a fire pit next to the 10th tee box. An island green – which jibed with the resort's name and fit within the parameters of the land's dictated design – also meshes with Potawatomi legend, which holds the turtle and its wisdom in high esteem. The challenging par-3 island green is surrounded by a bed of rock outcroppings and resembles the renowned creature.

In addition, a pair of majestic waterfalls split the fairways of the ninth and 18th holes, bringing the round of golf to a breathtaking close and providing ample fodder for discussion, whether stopping at the turn for a refreshment or reminiscing over a gaming table in the resort’s Island Casino.

Off the golf course, the resort recently unveiled its Palm Tower, which adds 162 spacious, well-appointed rooms and luxurious penthouse suites to the existing Sun Tower's 113 rooms. When complete, the Palm Tower will boast 210 rooms, bringing the resort's total to more than 320.

The addition is part of a multi-million-dollar expansion project at the Island Resort & Casino. Also new to the resort is the 1,327-seat Island Showroom which has hosted such national acts as the Blues Brothers, Martina McBride, 3 Doors Down and Gretchen Wilson.

The resort also introduced an expanded gaming floor with an additional 500 of the newest slot machines in the gaming industry, Club Four One nightclub and the Beachcomber Restaurant & Bar featuring exotic menu specialties.