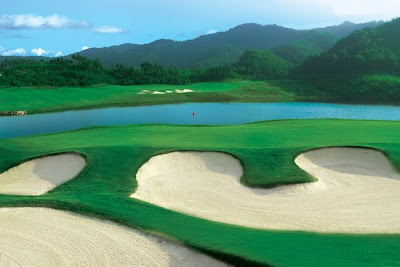 (SHENZHEN, China) - Mission Hills Golf Club - the world's largest collection of premier golf courses with 12 layouts designed by many of the greatest golfers and golf course architects from five continents - was recently honored with multiple awards by Asian Golf Monthly, the continent's most authoritative golf publication.

The world's largest golf club was named Asia's best golf resort for the third consecutive year and its founder, Dr. David Chu, was presented with the publication's inaugural lifetime achievement award for his devotion to promoting golf across the world's most populous continent. Dr. Ken Chu, Vice Chairman of Mission Hills Group, and Tenniel Chu, Executive Director of Mission Hills Golf Club, were also named golf entrepreneurs of the year.

"We're humbled that Mission Hills has yet again been recognized as the number one golf resort in Asia," says Tenniel Chu. "The property's transformation from a barren wasteland just 15 years ago into Asia's best golf resort is testament to our industriousness and foresight."

Regarding his entrepreneur of the year award, he adds: "Although it's nice to be singled out for my role in making Mission Hills a 'must visit' destination in Asia, I know I speak for my brother and father when I say the club's incredible success wasn't possible without the unsung efforts of the entire Mission Hills' team. I share this award with all of them."

Other highlights include the club's Dongguan Clubhouse, the world's largest at more than 680,000 square feet, being named the best clubhouse in Asia, and the pro-shop garnering praise as the best on the continent.

In addition, Mission Hills' Olazabal Course, site of November's Omega Mission Hills World Cup, was named the No. 2 golf course in China. The club's groundbreaking environmental practices, which include the Dongguan Clubhouse's certification as an ISO-14001 facility, were also recognized.

"Mission Hills is proud of its role as Asia's leading golf club," says Chu. "Our guests are assured of a golf and resort experience they'll never forget."