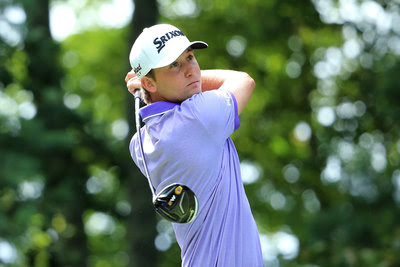 (Carlsbad, Calif.) – TaylorMade Golf, makers of the No. 1 Driver in Golf* and the winningest drivers on the PGA TOUR in 2016 with its M family of drivers, announced today the addition of six players to its expanding roster of PGA TOUR athletes playing TaylorMade metalwoods: Smylie Kaufman, Paul Casey, Seung-Yul Noh, Nick Watney and Jon Curran; further bolstering the most dominant Tour staff in the industry.

Smylie Kaufman
Smylie Kaufman (@SmylieKaufman10) joins Team TaylorMade after completing his first full season on the PGA TOUR, whereby he secured ten top 25 & four top 10 finishes in 28 events, including his maiden victory on Tour at the 2016 Shriners Hospitals for Children Open en route to a berth in the FedExCup Playoffs. The Louisiana State University graduate added the M2 driver into his bag at The Barclays last August and has played it in every tournament since.

Paul Casey
Three-time Ryder Cup participant Paul Casey (@Paul_Casey) joins Team TaylorMade with 14 international and 1 PGA TOUR victory on his resume. Predominantly playing on the European Tour — where he earned Player of the Year honors in 2006 — Casey carded 12 top 25 & 7 top 10 finishes in 22 tournaments on the PGA TOUR in 2016, which included runner-up finishes at both the Deutsche Bank and BMW Championships en route to a fourth place finish at the TOUR Championship. Casey first put the M2 driver into play at the Safeway Open in October and as of his most recent tournament played on Tour, still has it in the bag.

Seung-Yul Noh
One of the game’s most promising young stars, Seung-Yul Noh will play TaylorMade metalwoods throughout the 2017 campaign. Having made his PGA TOUR debut in 2010 at the age of 19, Noh possesses what many consider one of the best swings on Tour. Since 2014, he has accumulated 16 top 25 finishes, including a victory at the 2014 Zurich Classic of New Orleans. Noh put the ’16 M1 fairway into play for the first time at the Sanderson Farms Championship and the M1 430 driver the following week at the Shriners Hospital for Children Open. As of the RSM Classic, both are still in the bag.

Nick Watney
After a successful collegiate career following his walking on to the golf team at Fresno State University, Nick Watney’s accomplishments on Tour include five victories (his first coming in 2007) and career earnings amassing more than $24 million since first turning professional in 2003. The Sacramento, California native averages more than 302 yards off the tee, Watney switched into the ’16 M2 driver and three wood in addition to an M1 five wood at the Safeway Open in Napa, which remained in his bag through the end of the year.

Jon Curran
Jon Curran, a relative newcomer on Tour, turned professional in 2009 and has enjoyed early success in his career including three professional victories and 8 top 10 finishes (2 of which are runner-up finishes) on the PGA TOUR on his resume.

“We’re thrilled to welcome these six men into the TaylorMade family as our newest Tour staff ambassadors. It goes without saying each of their accomplishments speak for themselves and we look forward to watching them succeed while playing the highest performing products in the world out on Tour.” -Chuck Presto, Senior Vice President, Global Sports Marketing

*#1 Driver in Golf claim based on combined 2016 wins and usage on the PGA, European, Japan Golf, Web.com, Champions and LPGA Tours, as reported by the Darrell Survey Co. and Sports Marketing Surveys, Inc.
Posted by Blogger at 10:01 AM