(CARLSBAD, Calif.) – TaylorMade Golf, the industry leader in iron technology and innovation, announced today the release of P770 and P750 Tour Proto irons, the next advancement in forged players irons, designed specifically with the better player in mind with extensive input from the company’s most notable Tour staffers.

In P770, engineers endeavored to deliver a true Tour iron for highly-skilled players while simultaneously providing playability improvements that create a great playing experience for the better player. P770 features a unique forged 1025 carbon steel face/hosel and precision-milled faces and grooves along with 70-gram tungsten back-bar weighting in the mid and long irons (3-7) and a one-piece forged cavity back construction in the short irons (8-AW) for added feel and control. 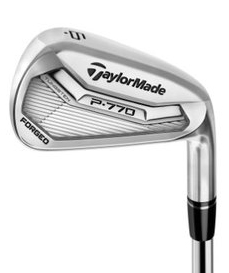 The P770 iron has higher MOI for ball speed consistency, thus more forgiveness, and has a lower center of gravity which creates a higher launch angle than its predecessors. The result is a high performance iron with great sound and feel with improved playability.

While featuring small offsets, thin top lines and shorter blade lengths, engineers were still able to incorporate technologies that improve on consistency, enabling P770 to offer improved launch conditions and forgiveness without sacrificing workability and feel. To do this, the development team focused on two primary areas: Lowering CG using tungsten weighting and utilizing a unique construction to allow for discretionary weight to be repositioned to the perimeter for maximum forgiveness.

The center of gravity is lowered by developing a shallower face profile, shorter hosel and 70-gram tungsten back/sole component. Engineers also utilized a tapered face thickness profile, whereby the upper portion of the face is thinner for low CG but thickened in the bottom portion near impact for a soft, solid sound and feel.

Beyond CG optimization, the construction of the P770 irons (two-piece) freed up additional discretionary weight for improved perimeter weighting. This is achieved through the undercut and the design of the back bar itself being lighter at the center than at the heel and toe. The tungsten back piece has weight removed internally to create heel-toe weighting without compromising on the muscular external appearance of the iron.

“We spent countless hours working with our PGA TOUR players to develop the most complete players iron we have ever created. Drawing inspiration from some of our most successful irons, P770 challenges the status quo of what a players iron should be.”
- Tomo Bystedt, Senior Director, Iron Creation

P750 Tour Proto
In addition to the P770, TaylorMade also announced the P750 Tour Proto irons, designed with in-depth feedback from the best players in the world. The P750 Tour Proto raises the standard by providing superior performance and feel in a design that delivers optimum workability for the best ball strikers.

This true forged blade with shallow cavity, made of 1025 carbon steel, is created using a new, multi-step forging process which culminates with a high tonnage strike, three times more forceful than a standard forged press. This process ensures precise, near-net head shaping requiring minimal hand polishing, resulting in a pure players iron with soft feel. The face and grooves are CNC milled for high precision, as is as the back cavity of the iron. The extra step of milling the cavity ensures that the face thickness, CG position and weight distribution are maintained to the highest standard demanded by the best players.

P750 irons feature a thin topline (thinner than the P770) and minimal offset for a blade-like look preferred by our Tour players. Additionally, the P750 irons incorporate a narrower sole and tighter leading edge for improved turf interaction. Similar to the P770, P750 includes tungsten weighting (5 grams precisely located in the sole) in the 3-7 irons that allow for perfectly positioned CG for optimal trajectory and shot-making.

P750 Tour Proto irons ($1,600 USD) will be available at retail on March 17, and will be offered in 3-PW with True Temper’s Dynamic Gold shafts with Golf Pride Tour Velvet 360 51.5g grips. A variety of custom shaft options are also available.

For more information, visit TaylorMadeGolf.com.
Posted by Blogger at 2:53 PM