(RELEASE) - The second event of the West Coast swing provided all the drama you'd expect with a field packed with the best players in the world. In the end, it was TaylorMade Tour staffer Jon Rahm who pulled away and emerged victorious on the South Course at picturesque Torrey Pines, carding two eagles on the back nine to claim the tournament title - his first on the PGA TOUR. With the win, the 22-year-old also punches his ticket to Augusta. 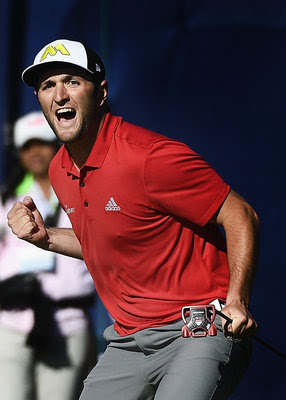 What You Need To Know:
- Rahm’s win is the 3rd worldwide and 2nd on the PGA Tour this year for TaylorMade's 2017 M drivers, joining Hudson Swafford, who won last week's Career Builder Championship.
- Rahm plays the 2017 M2 Driver set to 10.5* one click lower with an Aldila Tour Green TX 75 shaft. This is his second week with it in the bag, having added it last week at the CBC. His feedback to the Tour team was that he liked both the new M1 & M2, but benefited from the forgiveness and consistency of the M2.
- TaylorMade had 48.4% driver & 46% fairway wood counts at Torrey, both of which led all manufacturers by substantial margins.
- Rahm averaged 296.5 yards off the tee and led the field in strokes gained: off the tee for the tournament.
- Rahm also claimed the first global victory for the new TP5x golf ball, which he switched into at last week's Career Builder Challenge. TP5 and Tp5x golf balls are available on March 3.
- Rahm also played the new P750 Tour Proto irons, which he first added to his bag last week. He has Project X 6.5 shafts throughout the set.
- Rahm's short game brilliance this week was aided by the new yet-to-be-released Milled Grind wedges, which are also new to Rahm's bag.
- His setup is a traditional 52/56/60*, also with PX 6.5 shafts.

YOUR Greatest Career And Relationship Challenges?

I’ve managed to get you free “early access” to an exclusive gift called, “7 Sacred Signs From The Universe.”

The gift is actually from a friend...

A renowned healer and intuitive by the name of Alexander Wilson.

His work has changed thousands of lives and now he’s going to change YOURS too.

Just go here now to download your copy of his latest work, “7 Sacred Signs From The Universe!”

To Magic and Miracles,

P.S. You can think of his “7 Sacred Signs” report as a kind of “Universe Translator.” Just open it up and watch as messages from the Universe begin flashing into view!

P.P.S. Your copy is currently reserved, but you need to secure it right away. This free offer is only available to my subscribers for a VERY short period.

Hurry, On Over Here To Receive Your Gift!

I am glad that I came across your Household Service Audit. Thanks for sharing the post. Not only Auto Insurance, but every household also needs an “Insurance” to protect themselves from all the hazards.
Great Post, thanks for sharing it with us. Have a nice weekend ??.
You Might Like Instant Farmers Insurance Online