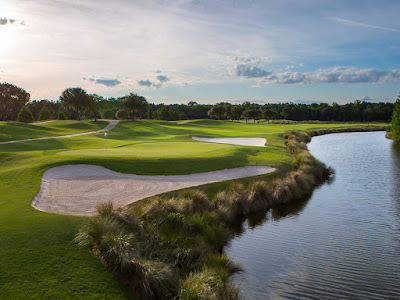 (PONTE VEDRA BEACH, Florida) – Bobby Weed Golf Design (www.bobbyweed.com), commissioned to execute a renovation of the bunkers at the Slammer & Squire golf course at the World Golf Village, in St. Augustine, Fla., has completed the project with all the desired objectives. The 18-hole, par-72 championship resort course, which opened in 1998, was designed by Weed with the consultation of golf legends Sam Snead and Gene Sarazen, for whom the layout was named.

“It was a great pleasure to be back working at the Slammer and Squire, nearly twenty years after its opening,” Weed said.

Weed’s goal in overseeing the bunker renovation at the Slammer & Squire was to enhance playability and aesthetics while easing maintenance requirements. Addressing the spiraling cost of bunker construction and maintenance has become an issue to which Weed is very sensitive. Bunker size reduction where applicable resulted in increased visibility and a more welcoming playing experience as well.

The course is known for its low-profile design, which showcases the unspoiled wetlands and wooded areas in which it is situated.

“The Slammer and Squire is one of the best playing golf courses in Florida,” said World Golf Hall of Fame member Lee Trevino in an interview during a Shell’s Wonderful World of Golf match with Gary Player at the Slammer & Squire.

The six-week project was carried out by contractor MacCurrach Golf. Weed’s oversight also resulted in significant savings and a reduction in the overall budget – ultimately allowing for extras to be added to the project, thus enhancing its success even more. The non-bunker-related additions contributed to the final product and allowed a number of areas of the golf course to be rehabilitated that were not originally considered, including additional cart-path work, extra sod work on several holes, tree and brush removal, and cart-path edge regrading.

Weed and his team ensured that nine holes on the golf course remained open for play at all times during the bunker renovation project.

“I appreciate Bobby Weed’s support, dedication and outstanding work in overseeing this project,” said Bob Barrett, CEO of Honours Golf, which manages the world-famous facility. “He took one of his great designs from the late 90s and made it more player and maintenance friendly while improving its aesthetic beauty.” Honours Golf, which manages a collection of resort and private facilities mostly in the southeastern U.S., is a division of Troon Golf.

For more information on Bobby Weed Golf Design, see www.bobbyweed.com.
Posted by Blogger at 11:01 AM