The overwhelming choice of players at every level of competitive golf and best-selling models around the world, Pro V1 and Pro V1x continually set the standard for golf ball performance through relentless research and development innovation and an industry-leading manufacturing process. Advancements for 2017 include new core and aerodynamic designs: 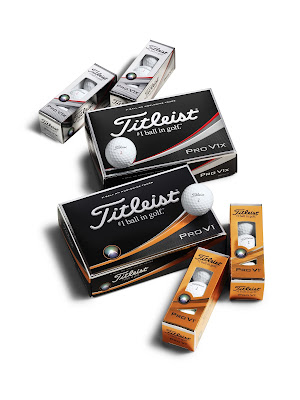 • The longest Pro V1 ever, 2017 Pro V1 has been reengineered with a Next Generation 2.0 ZG Process Core that delivers longer distance on all shots through lower long game spin and faster ball speed, while maintaining the very soft feel and superior short-game performance that Pro V1 players demand. A new spherically tiled 352 tetrahedral dimple design produces a penetrating trajectory with even more consistent flight.

• The extraordinary distance of the 2017 Pro V1x, featuring a ZG Process Dual Core, is enhanced by a new spherically tiled 328 tetrahedral dimple design that produces a high trajectory with its most consistent flight ever.

• 2017 Pro V1 and Pro V1x continue to deliver superior short game scoring performance. The soft Urethane Elastomer cover system used on both models is precisely formulated to deliver Drop-and-Stop greenside control with soft feel, providing golfers with the performance and confidence to hit it closer to the hole. The soft Urethane Elastomer cover, created by a chemical reaction that takes place during the casting process, also provides long-lasting durability throughout the course of play.

• Choosing between the total performance of Pro V1 and Pro V1x, golfers will notice differences in flight, feel and spin. Pro V1 flies lower with a penetrating trajectory and feels softer. Pro V1x flies higher, has a slightly firmer feel, and spins more on iron shots.

• Every Pro V1 and Pro V1x is manufactured by Titleist associates in the company’s state-of-the-art golf ball manufacturing facilities, to the highest performance and quality specifications in the industry. This investment in quality control ensures the most consistent performance from ball to ball, and dozen to dozen. This is critical to allowing golfers to consistently execute the same types of shots, round after round.

“Every time we set out to develop new Pro V1 and Pro V1x golf balls, our challenge is to set an even higher benchmark for golf ball performance,” said Michael Mahoney, Vice President, Titleist Golf Ball Marketing. “We are constantly in the field talking to golfers of all skill levels about what we can do to help them shoot lower scores. At the same time, the Titleist Golf Ball R&D and Operations teams are working together to develop new golf ball technologies that deliver performance golfers may not yet realize they need. It’s because of this ownership and commitment at every step of the process that we’re able to deliver meaningful performance improvements and make the best golf balls in the game even better.”

“No matter their playing ability, golfers have a simple choice when it comes to choosing the best golf ball for their game,” said Bill Morgan, Senior Vice President, Titleist Golf Ball R&D. “Either Pro V1 or Pro V1x will give you the best opportunity to shoot your lowest score. The decision purely comes down to flight, feel and spin. As we’ve told the pros, while you may consider yourself a ‘V’ or an ‘X’ player, we think this is a great time for you to reevaluate both Pro V1 and Pro V1x to see which 2017 model is the best fit for your game.”

Over the last two weeks, new Pro V1x players have earned back-to-back victories on the European Tour. Graeme Storm, playing a Titleist golf ball in competiton for the first time in more than nine years, won the BMW SA Open for his his first victory since 2008. Tommy Fleetwood, playing a Titleist golf ball for the first time as a professional, earned his first win in more than three years at the Abu Dhabi Championship.

• ADAM SCOTT: “I think the remarkable thing with the new Pro V1 is how far it goes now. I’m hitting it longer than I ever have but I also have that soft feel like when I grew up playing a balata golf ball – it’s incredibly soft.”

• JORDAN SPIETH: “I put new Pro V1x in play in Australia and in the first week we won. What I noticed immediately was the improved flight. It held its line in the crosswinds better.”

• Click here for more reaction from Adam Scott and Jordan Spieth, and to see what other players are saying about 2017 Pro V1 and Pro V1x.

In total, the testing and validation process for 2017 Pro V1 and Pro V1x included more than 80,000 golfers of all skill levels who received numerous iterations of prototypes throughout the rigorous two-year development process. This included six different double-blind prototype tests during the summer and fall of 2015 that were instrumental in determining the final 2017 designs.

• During the manufacturing process, mold cavities are used to the form the Urethane Elastomer cover and dimple pattern on each ball. Tens of thousands of mold cavities are needed to supply the Pro V1 and Pro V1x urethane casting lines. In order to achieve ball-to-ball consistency, it is crucial that every mold cavity produces the same result. To guarantee this level of precision, the Operations team has always manufactured the cavities and the tooling used to make the cavities (called “hobs”) in-house. An investment in new equipment to make the master hobs provides even tighter tolerances.

These advancements in both dimple design and hob production combine to produce new Pro V1 and Pro V1x models that deliver a more aerodynamically consistent flight.

“If a golfer hits a number of golf balls, they will fly through a ‘window’ in the air. What we’ve done with 2017 Pro V1 and Pro V1x is make that window smaller, which is the result of a more consistent flight,” Morgan said. “We go to great lengths to ensure that Pro V1 and Pro V1x are precision equipment. We know golfers depend on that consistency on every shot in their round.”