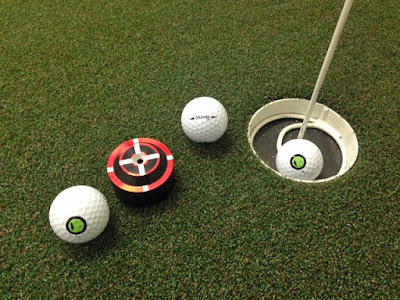 Do you have a routine when it comes to practicing your putting? I think I’ve seen everything. There are golfers who spend hours on the practice green - rotating clockwise around a single hole, then stepping out in concentric circles - drill after drill. These are “special” players who I wouldn’t want to face in a money match.

Or the guys who drop a couple balls down and target a hole 30 feet away before walking to the first tee. They’re another kind of special.

It’s safe to assume that the first example also works on their putting at home, in the office ... anywhere they can.

Either way, more times than not, golfers practice their putting because it saves strokes and can be done anywhere, any time. Dead Zero is making it even easier and, possibly, more effective.

Dead Zero is a simple concept - a round disk that is smaller than a golf hole. Get used to hitting this small, above-ground target and the holes on the course look huge. Considering how much confidence comes into play when attempting to make putts inside 10 feet, looking at a hole that appears larger has to help.

I’ve already had one person ask why they can’t use a hockey puck and save themselves $24.95. I can’t answer that. In fact, I’ve putted to a tee in the ground or used a bottle of water, much like Paul Azinger’s bottle drill.

That said, Dead Zero does offer a Pro Model ($29.95) that includes a bubble level on top of the disk that measures up to 6-degrees of slope. Both models include a bulls-eye patterned ball marker and an embroidered pouch for convenient storage.

I’m not a smart man (read in a Forrest Gump voice), so I’ll give you Dead Zero’s wording on the scientific research that went into the design.

"The disk size (diameter) is based on research combining ideal putt speeds (those that would travel 17” past the hole) with the measurement of an above-ground target. Referencing the graphic below, any putt that rolls within the target width (one that would strike the disk) would fall into the hole. Any putt that rolls to the left or right of a certain width, or misses the disk, results in a putt that misses the hole or lips out." 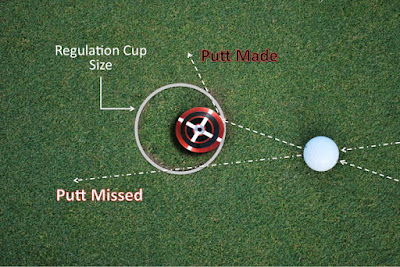 Does it work? In a word … Yes. While the Dead Zero putting disk is most effective in training your putting stroke within 10 feet, don’t rule out the benefits it provides tuning in distance control on lag putts, as well as being a nice target when chipping.