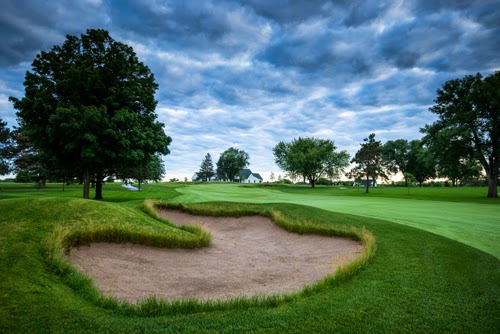 (RELEASE) - After 22 months without access to their beloved Keller Golf Course, Twin City golfers were finally let loose this past summer, beginning with a grand opening weekend starting July 18th.  They haven’t let up since, averaging three-hundred daily rounds seven days a week until daylight finally slowed them down.

Golfer Stephen Davis enjoyed his maiden voyage around the historic golf course renovated by Richard Mandell Golf Architecture, “I had the privilege of playing Keller this past weekend, thoroughly enjoyed the round and the course was a lot of fun. Has to be one of the best value golf courses I have played, right up there with Rustic Canyon, Wild Horse and CommonGround.”

In addition to the golf course work, a new clubhouse was designed by Partners & Sirny of Minneapolis, who replicated much of the original building.

A complete renovation of such an iconic golf course meant Richard had to listen carefully to the golfers and maintain the “Keller character” the locals spoke of protecting prior to the contractor arriving on site in October of 2012.

“The Keller character was a difficult riddle to decipher” said Richard.  “I can’t say that there were specific items that fell into the character ‘category.’  It was more of an aura that the golfers referred to without elaboration.”

Yet it seems that the Mandell team pulled it off.  Longtime Keller men’s club member Jerry Paul said he was “totally enthralled with the redesign.  I can't say enough about the great job Richard Mandell did in making Keller a truly wonderful golf course that still reflects the original design.”

“We really focused on the putting surfaces in trying to maintain the Keller character” Richard said.  “It was important to keep foreign features out of the design such as tiers in the greens or grass hollows surrounding the greens.”

In fact, Mandell noted there are a few more mounds around the greens than he would have added if it were strictly his design.  Yet that was an element he had to replicate in order to preserve the Keller look.

R.J. Smiley, a golfer who has played Twin City courses for more than sixty years, agreed with Mandell’s thought process, "The job Richard did giving Keller a modern look with improved sight lines while retaining the original routing was perfect!  The green complexes are very receptive but give golfers the ‘Old Keller’ challenge."

The topography of the ground was probably the most impressive element in Richard’s mind when he first saw the property that has hosted numerous men’s and women’s professional events in its history, including the 1932 and 1954 PGA Championships.

“There was no need to completely re-shape the land, only the need for solving drainage and visibility considerations,” Mandell pointed out.

Accommodating a public facility is always a tricky situation as the range of golfer abilities is great, so Mandell worked very hard to improve pace of play and ease the difficulties encountered by the high handicappers.  Yet he still ensured a compelling challenge for those seeking something more.  According to Keller Men’s Club President Tim Valento, Richard’s efforts hit the mark, “I always believed that Richard’s goal for Keller was to give us a golf course that would appeal to all golfers. After playing several rounds on the renovated Keller I believe he gave us a great course for all levels of golfer.”

Head professional Mark Foley agreed, “The work speaks for itself.  The golf course is really good and is absolutely beautiful. The visual and playability are fantastic.  Good shots are rewarded and yet understandably penal when one misses.  There are guys out here that I thought would never like anything, but they love this.”

The only thing slowing the new Keller down is the impending winter.  The prospects of a wonderful spring at Keller should hopefully keep Twin City golfers more than motivated through the next six months.
Posted by Blogger at 10:20 AM