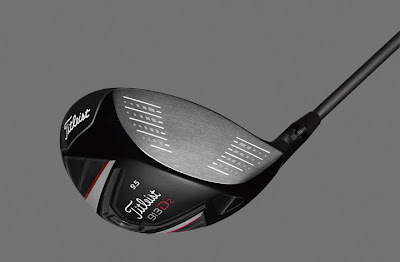 (FAIRHAVEN, Mass.) – Designed and built for more speed and more distance, the new Titleist 913 drivers deliver more performance with the most precise fit available to all serious golfers through an unparalleled combination of new innovations and Titleist’s industry-leading SureFit Tour hosel technology.

Featuring a high-speed, forged face insert, the new Titleist 913D2 and 913D3 drivers are the fastest, most consistent drivers Titleist has ever designed, delivering maximum ball speeds over a large area of the face.

They are also Titleist's most playable and forgiving drivers, primarily the result of improved launch conditions from a lower, more optimal center of gravity (CG) position, a new rear SureFit Tour weight and the fitting precision provided by the SureFit Tour adjustable hosel.

"The new 913D2 and 913D3 drivers offer the highest performance of any adjustable drivers on the market, particularly when it comes to speed and forgiveness," said Dan Stone, Vice President of Research and Development, Titleist Golf Clubs. “Every serious golfer, from tour players to amateurs of all skill levels, will experience more distance potential and better driving performance with 913.”

The 913D2 driver features a 460cc full-pear shaped head designed for maximum forgiveness and a slight draw bias, while the 913D3 has a 445cc classic-pear shape that is forgiving with tour-inspired workability. Unlike the 910 series, both D2 and D3 models now offer the same launch and spin characteristics to provide maximum fitting flexibility.

“Golfers can now choose their 913 model based on size or shape preference, amount of forgiveness or workability, and amount of draw bias,” said Stone. “They can then dial-in their launch and spin settings precisely using the SureFit Tour hosel.”

Fourteen players put new 913 drivers into play the first week they were available at the PGA Tour’s AT&T Classic in late June. Twenty-six players used 913 drivers about a month later at the PGA Championship, and the momentum only continues to build. Players gaming 913 drivers have already combined for eight victories across the worldwide professional tours, including victories by Rory McIlroy (PGA Championship, Deutsche Bank Championship) and Nick Watney (The Barclays) in three of the past four weeks on the PGA Tour.

"The new 913 drivers further define our commitment and success in providing players with the game's highest performing clubs with preferred looks, sound and feel," said Steve Pelisek, General Manager, Titleist Golf Clubs. "Our previous generation 910 drivers proved to be the most innovative drivers in our history. With 913, we've raised the bar even higher."

The 913’s 6-4 Titanium face insert has a central thick portion that mirrors the outer face profile. As you move out from the center, however, the insert is thinner and organically tapered so that it perfectly matches up with the body thickness at the face perimeter. It is also 2 grams lighter than the 910's face insert, allowing that mass to be redistributed to the new SureFit Tour weight low on the clubhead.

"We are always engineering our center face ball speed to the maximum, but the new insert allows for a more consistent deflection across the whole face which gives us more ball speed and more distance across a larger area of the face," Stone said. "The face insert is not a symmetric geometry, it's a complex structure and it required us to really think outside the box. We had to invent a new process just to produce it."

The new insert has increased the maximum ball speed area up to 11 percent from Titleist's previous generation 910 drivers, resulting in upwards of 2 mph of additional ball speed in certain hit locations (which translates to up to 4-6 additional yards).

"It's faster on heel and toe hits, and I think that's something everyone can understand," Pelisek said. "When we first brought these drivers out on tour, that's what we heard back from the players. Even tour players hit it on the heel and toe on occasion and they came back and said 'Wow, I'm getting a lot more distance on those off center hits.' "

"You have speed around the face, you have the ability to reduce spin and you have the SureFit Tour hosel to adjust launch – that's a pretty powerful combination to increase distance," Pelisek said.

To help create the 913’s more optimal CG, Titleist engineers further improved the casting and polishing process to produce an ultra-thin crown that allowed for more discretionary mass to be redistributed low and deep in the head.

The 913 drivers also feature a lower, flatter sole profile than 910 and a new SureFit Tour weight on the rear sole that further optimizes the CG for speed and forgiveness.

The SureFit Tour weight has a new, flat geometry with a screw that holds the weight in place but does not extend up into the driver head, contributing to a lower overall CG. The standard SureFit Tour weight has increased from 7 grams to 9 grams, taking the 2 grams of weight saved from the new forged face insert and reapplying it in this lower, more optimal position.

913D2 vs. 913D3: The 913D2 driver, with a larger head (460cc) and fuller pear shape, provides maximum forgiveness and has a slight draw bias as a result of its CG being positioned deeper in the head.

The 913D3 driver, with a smaller head (445cc) and traditional pear shape, is a forgiving driver yet provides more workability with no flight bias from its CG that is positioned closer to the face relative to the 913D2.

The SureFit Tour hosel, which debuted on Titleist 910 drivers, allows golfers to set loft and lie independently to optimize ball flight – higher or lower, and for more draw or fade for improved shot control and maximum distance.

"We call it 'Tour Van-in a hosel' because that was our inspiration for designing SureFit Tour in that it provides all the power of a tour van – the ability to bend for loft and lie, and interchange shafts – right on the tee at the point of fitting," Stone said.

The dual angle SureFit Tour hosel features a sleeve and ring, each with four settings. The sleeve settings are numbered 1, 2, 3, 4 and the ring settings are lettered A, B, C, D. In total there are 16 settings, each creating a unique loft and lie combination.

A Titleist authorized fitter will utilize the SureFit Tour hosel, coupled with interchangeable shafts and SureFit Tour weights, to determine a player's optimal setup so they are playing a 913 driver fit precisely to their game.

"We've already seen the fitting effectiveness of the SureFit Tour hosel with the success of 910 metals," Pelisek said. "Tour players on down to players with more moderate swing speeds benefit greatly from a more precise fit."

"HOTTER" SOUND AND FEEL: Golfers will notice immediately the 913's fuller, longer and more powerful sound at impact, which tour players have described as "hotter."

The sound was acoustically-engineered by an advanced research team to complement the club's fast-face technology.

As sound is a crucial component of feel, one tour player described his first swings with the 913 driver as "exploding off the club face."

913 DRIVERS ON TOUR: The buzz surrounding the new Titleist 913 drivers built quickly, with Titleist's previous generation 910 drivers having earned more wins on the PGA Tour than any other driver since their debut two years ago.

The seeding and tour validation process for the 913 drivers began in late June at the PGA Tour's AT&T National event at Congressional Country Club, where 14 players immediately put 913 drivers in play.

That same week, Rory McIlroy tested the new driver for the first time at his home in Ireland, also deciding to add a 913D3 8.5º to his bag straightaway for the European Tour's Irish Open.

A couple weeks later, the Titleist 913 drivers recorded their first pair of victories on the same Sunday. Bernd Wiesberger played a 913D3 7.5º driver in winning the European Tour's Lyoness Open, while Ben Kohles played a 913D3 9.5º on his way to the winner's circle at the Web.com Tour's Nationwide Children's Hospital Open, where he was making his professional debut. Remarkably, Kohles notched the 913's third win the following week at the Cox Classic.

The momentum continued into the PGA Championship, as 26 players stepped to the first tee at Kiawah Island's Ocean Course with 913 drivers in the bag. That includes McIlroy, who went on to win in record-setting fashion, claiming the first PGA Tour and major victory for the new 913 drivers.

The 913 drivers have since won two more times on the PGA Tour, with McIlroy claiming victory again at the Deutsche Bank Championship, the second event of the PGA Tour’s FedEx Cup Playoffs. A week earlier, Nick Watney gamed a 913D3 10.5º in winning The Barclays.

BOLD LOOKS: The 913’s total performance advancements are highlighted with bold new cosmetics. Featuring an improved toe profile, the club head retains its striking, black PVD finish with a new black body paint that provides a sense of confidence and power at address.

Rounding out the stock shaft matrix is the Mitsubishi Titleist Bassara W 50 (higher launch), the No. 1 sub-60g shaft model on the 2012 PGA Tour and the lightest shaft to ever win on the PGA Tour (Ben Crane, 2011 McGladrey Classic).