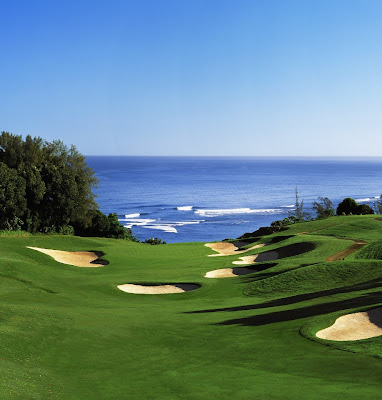 (PALO ALTO, Calif.) - Being ranked No. 1 never gets old for Robert Tent Jones II Golf Course Architects (RTJ II), which has earned the top spot on GOLF Magazine's list of "Top Courses You Can Play" in Hawaii, following its recently completed renovation of the Prince Course at Princeville, Kauai.

Consistently rated among the premier golf course architecture firms in the world, RTJ II's courses have also been ranked No. 1 in 10 nations as well as in 10 states in the US by prominent golf media. The new ranking for the Prince Course is included in GOLF Magazine's State-by-State "Best Courses Near You" list, compiled every other year as part of the "Top 100 Courses You Can Play." RTJ II also designed the No. 1 course in Washington (Chambers Bay, site of the 2015 U.S. Open Championship), and the No. 1 course in Maine (Sunday River Golf Club).

Published in the September issue of GOLF Magazine, the "Top 100 Courses You Can Play" includes five RTJ II designs from coast to coast:
• No. 14 Chambers Bay
• No. 16 The Prince Course
• No. 42 The Links At Spanish Bay, Pebble Beach, Calif.
• No. 64 CordeValle, San Martin, Calif.
• No. 89 Sunday River Golf Club, Newry, Maine

"The rankings reflect the high quality and variety of golf course designs that we have been fortunate enough to create," said Robert Trent Jones, Jr., Chairman and Master Architect at RTJ II. "We are particularly excited about the recognition for our improvements to The Prince Course. Our firm implemented a wide-ranging refreshment that has returned the golf course to its original pristine condition and will guarantee its continued stature as the best layout in Hawaii. Essentially, we gave The Prince the royal treatment it deserved."

Reopened this spring following a multi-million-dollar renovation project that began in January 2011, The Prince Course now features reconstructed greens, remodeled bunkers, and improved visibility throughout- which have enhanced its strategic values and restored the original design intent.

One of the world's busiest and most prolific golf architects, Jones has designed more than 270 courses in more than 40 countries and 30 U.S. states. His courses have hosted tournaments on every major golf tour; are recognized as among the world's finest by leading golf publications; and have received countless awards.

Jones Jr.'s architectural vision is to honor the cultural, geographical, and historical aspects of the land while revealing the best possible course on each site. His team of architects and support staff has built for all manner of clients, from municipalities to private individuals, and is expert at creating sustainable courses that make use of the latest innovations and best practices to protect and enhance the environment.

A full list of RTJ II golf courses and awards can be found at www.rtj2.com.