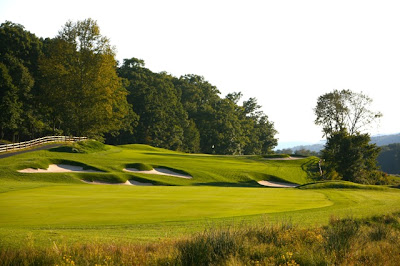 (BEDFORD SPRINGS, Pa.) - The Old Course at the Omni Bedford Springs Resort & Spa has earned distinction as one of Golfweek's top 100 resort courses in America. The "American Classic" course ranked No. 45 on the magazine's annual list of the "Best Resort Courses" for 2010, out-shooting the only other Pennsylvania address to make the cut. Renovated in 2007, the Old Course provides an interesting history, with some holes thought to be among the first installed in America.

The Old Course is the work of three Grand Masters of American golf course design, as well as one notable contemporary:
• Spencer Oldham, who laid out the original 18-hole course in 1895 with select holes that are believed among the first on U.S. soil.
• A.W. Tillinghast, who reduced the number of holes on the course to 9 as part of his 1912 redesign.
• Donald Ross, who added the back 9 holes and completed his redesign during the 1920s.
• And Ron Forse of Forse Design, Inc., who led a restoration of the Old Course for the reopening of the Omni Bedford Springs Resort & Spa in 2007.

The Old Course has also been recognized by discerning observers of the game with several other accolades including #1 "Playable Classic Course" (50 years-plus) in Pennsylvania by Golfweek; "Renovation of the Year" by Golf Inc.; "Best of the Best" in the 20th anniversary edition of The Robb Report; and One of the Top Golf Courses in the United States 2009/2010 by Zagat.

The Old Course has also earned recognition and praise on a local level. The resort hosted the Western Pennsylvania Amateur Championship in 2008, as well as the Tri-State PGA's "Omni Bedford Springs Open" in 2008 and 2009.