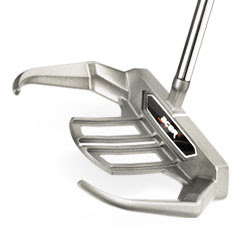 (CITY OF INDUSTRY, Calif.) - Hireko Golf announced the introduction of the newest member of the Acer CB Putter series; CB7.

The CB series is renowned for having some of the highest moment of inertia (MOI) putters in the entire industry today which accomplishes two important benefits. The extreme perimeter weighting creates an ultra-high MOI keeping the ball traveling on its intended line without losing energy. Secondly, moving the weight rearward helps reduce the skidding of the ball and helps the ball start rolling quicker for better distance control.

The new CB7 putter is engineered no differently except it offers a unique appearance and hosel configuration within the series..

"The beautifully sculpted angular arms of the new Acer CB7 Putter constitute a high percentage of the club's mass allowing increased perimeter weighting and a high moment of inertia," states Technical Director Jeff Summitt. "In addition, the lightweight stainless steel body frees more weight to be distributed to the perimeter wings for a truer roll."

The Acer CB7 Putter series putter was designed for a traditional putter at standard or even shorter assembly lengths, but with the center-shafted design would make and excellent choice for belly putter lengths. The Acer CB7 head is precision cast from stainless steel and features a soft, black milled aluminum insert and vivid multiple alignment guides.

Every Acer CB7 Putter is made to order and is available as a right hand model for $44.95 each online at www.HirekoGolf.com.