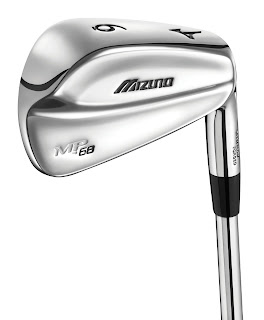 (Norcross, GA) – Mizuno introduces the new MP-68 irons featuring the latest innovation in muscleback iron design, 3D Muscle Technology. Mizuno has long been known for providing the best feel in the game of golf, and now through extensive computer optimization and modal analysis they have taken that legendary feel, as well as workability and sound at impact, to all new levels with the Grain Flow Forged MP-68 muscleback irons.

3D Muscle design strategically redistributes weight from specific locations around the clubhead into the 3D muscle pad which creates a COG location that is lower and more face centered, providing a penetrating, predictable, and workable ball flight for complete shot control.

Mizuno conducted countless hours of player testing with players from the PGA Tour, Nationwide Tour, and European Tour. The MP-68 irons competed in blind tests against multiple prototype iron designs as well as Tour-proven Mizuno irons from the past, such as the MP-33, considered by many to be the standard of muscleback design. The MP-68s with 3D Muscle Technology were the overwhelming choice of the test group of professional for their solid feel and overall performance.

“Mizuno has a long and storied history of producing the very best muscleback irons in the world,” said Dick Lyons, Vice President and General Manager, Mizuno USA Golf Division. “The difficult challenge we undertook was to deliver a new age in muscleback design to further enhance the benefits the MP player is looking for. The new 3D Muscle enables the player to have full control over their shot. Moreover, the feel of the new MP-68 iron is also enhanced with our dedicated Modal Analysis technology. For the player who demands complete ball control and amazing feel, the MP-68 delivers.”

The MP-68 irons also have a Tour confirmed sole shape, featuring a rolled leading edge, flattened mid-sole, and a rolled trailing edge to ensure the appropriate amount of turf interaction for pure ball striking. A durable, double nickel chrome plated finish provides a player preferred look, and modified U-grooves, which conform to the Condition of Competition 2010, produce the ideal spin rate for maximum playability in all conditions.

The MP-68 will be offered in right and left handed models with True Temper Dynamic Gold S300 and R300 steel shafts for a suggested retail price of $1,100 and also available with Project X 5.5 shafts for $1,200. The exclusive MIZUNO/Golf Pride M-21 58 Round grips will come standard. (Other shafts and grips as well as length and lie options are available through Mizuno’s Custom Club department).

For more information on the MP-68 irons visit www.mizunousa.com.

Keep on the good work and write more article like this...

Great work !!!!Congratulations for this blog