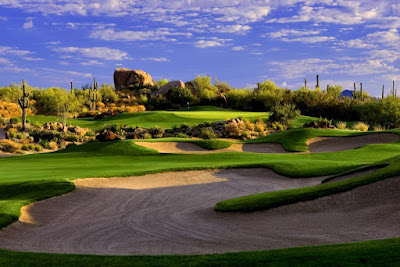 The summer 2018 enhancements to the Pinnacle Course follow a similar project conducted during the summer of 2017 on Troon North’s Monument Course. The course renovations over the last two summers were the first major changes to the award-winning property since a 2007 renovation, reconfiguration and rerouting. In 2007, under Weiskopf’s direction, the 36-hole facility was reconfigured by blending the two courses together and changing the sequence in which the holes were played.

“The course enhancements made over the past two summers have improved two already incredible golf courses in Monument and Pinnacle,” said Tim Schantz, president, Troon. “Hats off to Ron Despain and the agronomy team at Troon North on a job well done. Moving forward we’ll continue to refine and reinvest in our flagship facility to keep it atop the leaderboard of outstanding Arizona golf properties.”

Troon North’s Pinnacle and Monument courses are ranked #25 and #58 respectively on GOLF Magazine's prestigious ranking of the 2016/2017 "Top 100 Courses You Can Play in the United States.” In addition, GOLF Magazine named Pinnacle the #1 golf course and Monument the #4 golf course in Arizona in their ranking of "Best Courses You Can Play in Arizona." Troon North is no stranger to awards and accolades as both courses have been recognized in numerous Top 100 and Best-in-State rankings by GOLF, Golf Digest and Golfweek since the facility opened in 1990.

For additional news and information, visit www.Troon.com.
Posted by Blogger at 3:13 PM