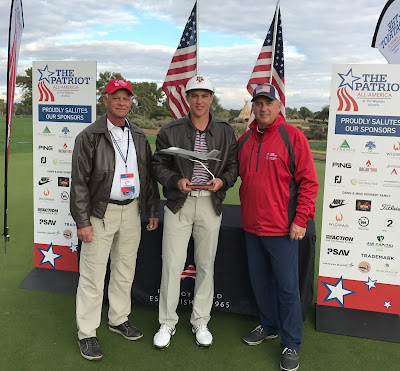 (PHOENIX, Ariz.) – Exactly one year, 9 months and 27 days since he hoisted the Patriot All-America Invitational trophy at The Wigwam Resort in Litchfield Park, Cameron Champ claimed his first career victory on the PGA TOUR at the Sanderson Farms Championship. In just his 9th start on TOUR, Champ shot 4-under 68 on Sunday at the Country Club of Jackson (Miss.) for a 21-under 267 total and a four-stroke victory.

Now in its 8th year, the Patriot All-America is regarded as a top international amateur event, attracting PING All-America golfers from all three NCAA Divisions, NAIA and NJCAA rankings as well as from universities outside the United States.  The Patriot All-America is a collaboration between the Arizona Golf Association, JDM Partners, The West Valley Mavericks and the Golf Coaches Association of America in partnership with the Folds of Honor Foundation. The Thunderbirds, hosts of the PGA TOUR’s Waste Management Phoenix Open, also volunteer and support the event.

Patriot All-America Invitational participants play for more than themselves or their school. Each golfer honors a fallen or severely injured soldier by carrying a golf bag bearing the name of that soldier. Before the tournament, participants receive a card with the soldier’s story, so they can be familiar with who that person was, what they represented and how they were killed or wounded in action. At the conclusion of the tournament, the golf bags are shipped to players’ schools and auctioned with all proceeds benefitting the Folds of Honor Foundation.

Champ first gained national attention in 2017 as an amateur for leading the field in driving distance at the 2017 U.S. Open at Erin Hills.  Champ chose to forgo his senior season at Texas A&M, turning his sights to the 2017 Web.com Tour Qualifying Tournament instead. In August of 2018, Champ picked up his first professional victory at the Web.com Tour’s Utah Championship presented by Zions Bank, posting a 24-under 260 to set a new 72-hole tournament record.

"All the hard work over the years, all the sacrifice my family has made for me to be able to have this opportunity," said Champ after his Sanderson Farm’s victory. "This last year has been just amazing. I was in school this time last year, made it through Q-School, Web.com Tour, now PGA TOUR winner, it's just unreal."

At the 2016 Patriot All-America, Champ knocked in a one-foot putt for par on the second playoff hole to defeat Zach Olsen of Oklahoma State. Champ entered the final round tied for sixth, three-shots back of second round leader. During his final round, Champ shot a 4-under par 66 (203) that included six birdies and two bogeys to get into the playoff.

The 2018 Patriot All-America Invitational presented by the Valley Toyota Dealers 54-hole, stroke play competition will be played December 29, 30 and 31 with a champion crowned at approximately 4 PM on New Year’s Eve. The winner of the tournament receives a sponsor exemption into the Web.com Tour’s Wichita Open played June 20 - 23 at Crestview Country Club in Wichita, Kansas.

For more information on The Patriot All-America Invitational presented by the Valley Toyota Dealers, visit www.patriotallamerica.com.
Posted by Blogger at 10:43 AM