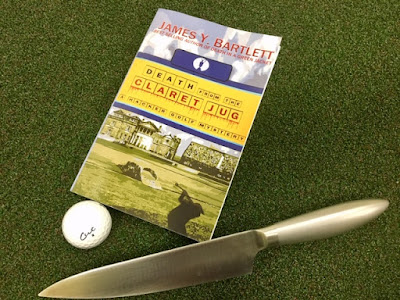 I like murder mysteries and I LOVE golf. Put the two together and you have the makings of an incredible novel. Well, James Bartlett has done just that with “Death from the Claret Jug.”

The fifth title in his Hacker Golf Mystery series, the book follows golf writer Pete Hacker’s quest to solve the suspicious death of a rules official while the golf world converges on St. Andrews for the Open Championship. With girlfriend Mary Jane Cappellitti by his side, Hacker zeros in on the guilty party.

Bartlett does a wonderful job of weaving in copious amounts of golf with smart and witty prose. There are myriad ways this story could turn and I thought I knew the ending several times before being surprised by the outcome.

I found myself reading the book in a cheesy tone of an old Humphrey Bogart characterizer, which only added to my enjoyment and took me back to when my grandfather would have me watch old black-and-white movies with him when I was a kid. In loved Gramps, even though I would’ve preferred Bugs Bunny and Daffy Duck over Bogie and Bacall.

With “Death in a Green Jacket (2007)” already published, “Death from the Claret Jug” marks the midway point in Bartlett’s planned major series. Expect to see titles referencing the U.S. Open and PGA Championship in the years to come. The prolific author’s other titles include: “Death Is a Two-Stroke Penalty” (1991), "Death from the Ladies' Tee” (1992), and “Death at the Member-Guest” (2006).

Published by Yoeman House Publishers, the paperback is available at amazon.com.
Posted by Blogger at 2:12 PM